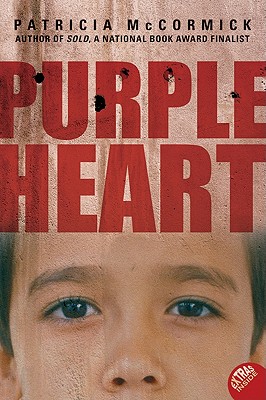 “Patricia McCormick reminds us that the war in Iraq is not only about terrorists killing and being killed. The war is also about civilians who may be as deadly as the insurgents, or who might be as innocent as they look. These are the tough choices facing Private Matt Duffy. This book teaches us, young and old alike, just how complicated war is.”
— Karen Briggs, Great Northern Books and Hobbies, Oscoda, MI
View the List

When Private Matt Duffy wakes up in an army hospital in Iraq, he's honored with a Purple Heart. But he doesn't feel like a hero.

There's a memory that haunts him: an image of a young Iraqi boy as a bullet hits his chest. Matt can't shake the feeling that he was somehow involved in his death. But because of a head injury he sustained just moments after the boy was shot, Matt can't quite put all the pieces together.

Eventually Matt is sent back into combat with his squad—Justin, Wolf, and Charlene—the soldiers who have become his family during his time in Iraq. He just wants to go back to being the soldier he once was. But he sees potential threats everywhere and lives in fear of not being able to pull the trigger when the time comes. In combat there is no black-and-white, and Matt soon discovers that the notion of who is guilty is very complicated indeed.

National Book Award Finalist Patricia McCormick has written a visceral and compelling portrait of life in a war zone, where loyalty is valued above all, and death is terrifyingly commonplace.

“In this suspenseful psychological thriller…McCormick raises moral questions without judgment and will have readers examining not only this conflict but the nature of heroism and war.”
— Publishers Weekly (starred review)

“Gripping details of existence in a war zone bring this to life.”
— ALA Booklist

“Many of the soldiers in Iraq were not yet teenagers when this war began. What they and the children of Iraq are experiencing is not a political issue-it’s a human issue. PURPLE HEART is a visceral and affecting portrait of their world.”
— —Bob Woodruff, ABC News