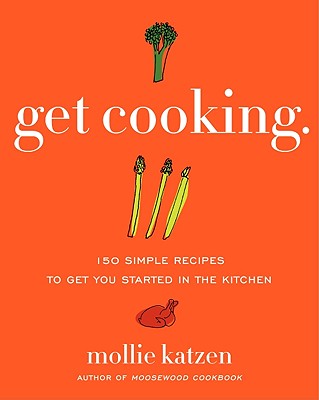 150 Simple Recipes to Get You Started in the Kitchen

Get Cooking is the first in a series of cookbooks geared toward beginners by Mollie Katzen, the author of the bestselling Moosewood Cookbook. Here are 125 foolproof , basic recipes for soups, homemade pasta, roast chicken, burgers, vegan specialities, chocolate chip cookies—and more—that anyone can enjoy making, no matter how inexperienced they are in the kitchen.

Praise For Get Cooking: 150 Simple Recipes to Get You Started in the Kitchen…

“Katzen’s latest is a fresh, contemporary entry in the 101 subgenre...Her enthusiasm for the subject and her ability to keep the proceedings truly simple makes for the rare beginner’s book that accomplishes its mission.”
— Publishers Weekly (starred review)

With more than six million books in print, Mollie Katzen is listed by the New York Times as one of the bestselling cookbook authors of all time. A 2007 inductee into the prestigious James Beard Cookbook Hall of Fame, and largely credited with moving healthful food from the "fringe" to the center of the American dinner plate, Mollie has been named by Health magazine as one of the "Five Women Who Changed the Way We Eat."

In addition, she is a charter member of the Harvard School of Public Health Nutrition Roundtable and an inaugural honoree of the Natural Health Hall of Fame. An award-winning illustrator and designer as well as a bestselling cookbook author and popular public speaker, Mollie is best known as the creator of the groundbreaking classics Moosewood Cookbook and The Enchanted Broccoli Forest. Her other books include the children's trilogy Pretend Soup, Honest Pretzels, and Salad People (referred to as the "gold standard" of children's cookbooks) by the New York Times), and a collaboration with Walter Willett, M.D., of Harvard, on Eat, Drink, and Weigh Less.

Since 2003, Mollie Katzen has been an adviser to Harvard University Dining Services, and cocreator of their new Food Literacy Project. This is the first volume of her new Get Cooking series, continuing Mollie's lifelong mission to spread cooking knowledge and food literacy as broadly as possible.