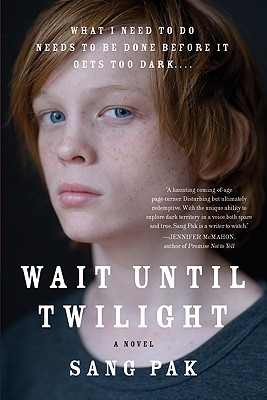 A hauntingly strange and powerfully affecting debut novel that heralds the arrival of a unique and captivating literary voice, Sang Pak's Wait Until Twilight is a coming-of-age story that explores the complex darkness infecting a damaged psyche in a small Southern town.

Not long after his own mother's death, sixteen-year-old Samuel discovers a set of deformed triplets hidden behind closed doors in his sleepy Georgia community. The babies—whose shut-in mother believes they were immaculately conceived and whose menacing brother is a constant threat—take control of Samuel's every waking and sleeping thought. His only escape, he realizes, will be to save the monster children. But to do so, he must rein in his darkest impulses as he undergoes a profound transformation from motherless boy to self-defined man—because sometimes the most terrible monsters are those that live inside us all.


Praise For Wait Until Twilight: A Novel…

“A haunting coming of age page-turner. Disturbing, but ultimately redemptive. With the unique ability to explore dark territory in a voice both spare and true, Sang Pak is a writer to watch.”
— Jennifer McMahon, New York Times bestselling author of ISLAND OF LOST GIRLS and PROMISE NOT TO TELL

“[A] very good first novel... haunting and troubling... Pak shows that he is a careful and confident writer, somebody who clearly bears watching.”
— Booklist

Sang Pak is a Georgia-raised writer with English and psychology degrees from the University of Georgia. He is currently on hiatus from New York University's graduate program in psychology. He divides his time between Georgia, southern California, and Seoul. Wait Until Twilight is his first novel.
Loading...
or support indie stores by buying on