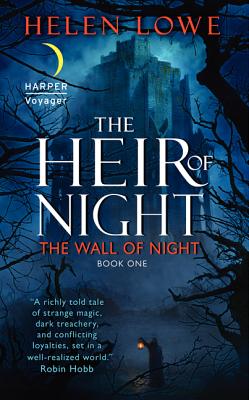 The Heir of Night (Mass Market)

An award-winning poet and acclaimed author of Young Adult fiction, Helen Lowe  now brings us The Heir of Night—the first book in her four-volume Wall of Night series, a brilliant new epic fantasy saga of war, prophecy, betrayal, history, and destiny. A thrilling excursion into a  richly imagined realm of strife and sacrifice, where the fate of a dangerously divided world rests in the hands of one  young woman, The Heir of Night is a fantasy classic in the making, sure to stand alongside the much beloved works of J.R.R. Tolkien, Robin McKinley, and Guy Gavriel Kay.

“The Heir of Night by Helen Lowe is a richly told tale of strange magic, dark treachery and conflicting loyalties, set in a well realized world.”
— Robin Hobb