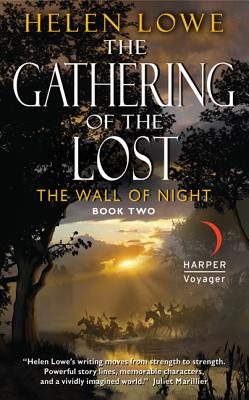 The Gathering of the Lost (Mass Market)

Sure to become an epic fantasy classic, Helen Lowe’s magnificent Wall of Night series is big, ambitious, and gorgeously drawn—a story of bravery, treachery, and cataclysm in a richly imagined world. The Gathering of the Lost is the second of four books set in a fantastic imperiled realm garrisoned by nine great Houses and protected from the terrible Darkswarm by the towering mountain range that gives the series its name. Supremely literate, brilliantly imagined and executed fantasy in the vein of Brandon Sanderson, Guy Gavriel Kay, and Barbara Hambly, The Gathering of the Lost is populated by a grand cast of unforgettable characters, some still holding to the beleaguered Wall, others scattered in their quest for the fabled Heir of Night, who vanished from their midst five years earlier.

Helen Lowe’s Wall of Night series has the potential to become a classic, right up there with the likes of George R.R. Martin’s A Song of Ice and Fire . . . Anyone who loves to read fantastic fiction from a true talent should read this series.”
— SF Site

“Helen Lowe writes wonderful stories, yes, but her work also speaks with lyricism to deeper questions of how we treat each other. With lovely prose that brings vivid life to her characters, she creates a universe with people we care about. This is an author with a gift for fantasy.”
— Nebula Award-winning author Catherine Asaro

“Helen Lowe’s writing moves from strength to strength. Powerful story lines, memorable characters and a vividly imagined world make THE GATHERNG OF THE LOST a strong follow-up to The Heir of Night.”
— Juliet Marillier
or
Not Currently Available for Direct Purchase
Copyright © 2020 American Booksellers Association