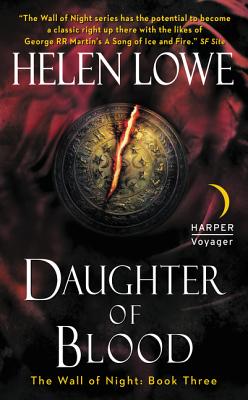 The Wall of Night Book Three

Malian of Night and Kalan, her trusted ally, are returning to the Wall of Night—but already it may be too late. The Wall is dangerously weakened, the Nine Houses of the Derai fractured by rivalry and hate. And now, the Darkswarm is rising . . .

Among Grayharbor backstreets, an orphan boy falls foul of dark forces. On the Wall, a Daughter of Blood must be married off to the Earl of Night, a pawn in the web of her family's ambition. On the Field of Blood, Kalan fights for a place in the bride's honor guard, while Malian dodges deadly pursuers in a hunt against time for the fabled Shield of Heaven. But the Darkswarm is gaining strength, and time is running out—for Malian, for Kalan, and for all of Haarth . . .


Praise For Daughter of Blood: The Wall of Night Book Three…

“Returning fans...will delight in Lowe’s intricate world-building and keen eye for politicking. The introduction of new characters and prophecies adds some depth of intrigue to Lowe’s impressive epic.”
— Publishers Weekly

“Helen Lowe’s Wall of Night series has the potential to become a classic, right up there with the likes of George R.R. Martin’s A Song of Ice and Fire...Anyone who loves to read fantastic fiction from a true talent should read this series.”
— SF Site

“Helen Lowe writes wonderful stories, yes, but her work also speaks with lyricism to deeper questions of how we treat each other. With lovely prose that brings vivid life to her characters, she creates a universe with people we care about. This is an author with a gift for fantasy.”
— Nebula Award-winning author Catherine Asaro

“Helen Lowe is undoubtedly one of the best authors of epic fantasy ever to emerge...DAUGHTER OF BLOOD may well be the best and most complex epic fantasy novel of the year.”
— risingshadow.net
or
Not Currently Available for Direct Purchase
Copyright © 2020 American Booksellers Association