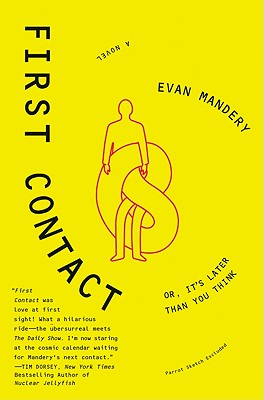 Or, It's Later Than You Think

“I am impressed with Mandery's concisely drawn yet vivid characters, with his 'translation' of the lives of aliens, and with the insightful commentary woven gently and insistently throughout the book. His handling of the post-modern, self-referential trope is masterful and refreshingly light. This could be confidently recommended to anyone who likes Vonnegut, Adams, Fforde, satire in general, and--yes-even Mr. Pratchett.”
— Emma Aprile, Carmichael's Bookstore, Louisville, KY
View the List

In the bestselling and rightfully cult-inspiring tradition of Kurt Vonnegut and Douglas Adams comes First Contact —an hysterically funny satire about Presidential politics and intergalactic misunderstanding. This smart and biting novel by Evan Mandery—an author equally well-versed in the lives of the U.S. presidents, existential philosophy, and the Simpsons—offers much food for intellectual thought along with an all-you-can-eat buffet of laughs, as it chronicles the first close encounters between earthlings and a vastly superior extraterrestrial race from Rigel-Rigel. As the subtitle of First Contact so presciently informs us, “It’s Later than You Think.”


Praise For First Contact: Or, It's Later Than You Think…

“First Contact was love at first sight! What a hilarious ride - the uber surreal meets The Daily Show. I’m now staring at the cosmic calendar waiting for Mandery’s next contact.” — Tim Dorsey, Author of Nuclear Jellyfish

“Mandery’s sharp sense of humor and habit of addressing the reader make for a stimulating and intelligent read that’s never short on laughs.” — Publishers Weekly

Evan Mandery is a graduate of Harvard Law School, a professor at John Jay College of Criminal Justice in New York City, and the author of Dreaming of Gwen Stefani, First Contact, Q: A Novel, and two works of non-fiction.