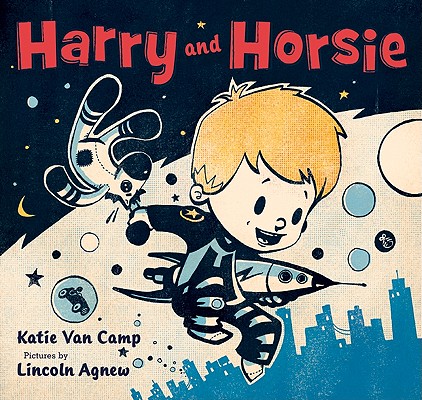 “Harry doesn't go anywhere without his stuffed pal Horsie. So when Horsie (along with Harry's toy train and cars) is carried off by a bubble from Harry's Super Duper Bubble Blooper, the little boy has no choice but to head off in hot pursuit in his rocket ship. Adventurers old and young will be captivated by this fantastic tale!”
— Megan Graves, Hooray for Books!, Alexandria, VA
View the List

When a boy named Harry

sneaks out of bed one night

with his best friend, Horsie,

to play with his Super Duper Bubble Blooper --

Illustrated with retro-comic art, this is a charming story about the power of friendship and imagination from a talented new team.

With dashing visuals that capture Harry’s deep space adventure with verve to spare, and a comforting resolution, [HARRY AND HORSIE} has potential to become a bedtime favorite. — Booklist

Katie Van Camp is a former dancer who, at the age of eighteen, moved to Shanghai, China, to open a ballet school and teach kindergarten. A few years later she headed to New York to work as an au pair for a little boy named Harry (and his best friend, Horsie), who inspired her to write both Cookiebot! and her first picture book, Harry and Horsie. Katie is now back in Asia, writing and teaching. She currently calls Tokyo home.

Lincoln Agnew once tried to build his own robot out of a plastic bucket, a broken microwave, and "technology," but sadly its abilities were limited to catching fire. Years later, after giving up on world domination, he attended the Alberta College of Art and Design, where he obtained degrees in both illustration and photography. Lincoln made his debut as a picture book illustrator with Harry and Horsie, for which he won the 2009 Society of Illustrators "The Original Art" Founder's Award as well as the Marion Vannett Ridgway Award. He is currently rebuilding that robot.