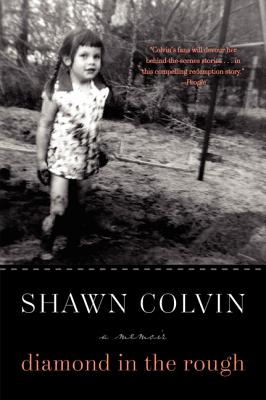 Diamond in the Rough

After learning to play guitar at the age of ten, Shawn Colvin was determined to make a life in music. Diamond in the Rough recounts this passionate musician's coming-of-age, from the prairies of South Dakota to dark smoky bars in Austin, Texas, to the world stage at the Grammys. With the wit, lyricism, and empathy that have characterized Colvin's performances and inspired audiences worldwide, Diamond in the Rough looks back over a rich lifetime of highs and lows with stunning insight and candor. In its pages, we witness the inspiring story of a woman honing her artistry, finding her voice, and making herself whole.


Praise For Diamond in the Rough: A Memoir…

“[Colvin is] a gifted conversational writer with a wicked and unabashedly goofy sense of humor ... Her buoyant spirit fairly leaps off the stage, and her self-deprecating wit is as keen and quirky in recalling her brief brush with superstardom as it is applied to an ill-fated relationship.”
— USA Today

“Colvin’s fans will devour her behind-the-scenes stories; single mothers will relate to her struggle to do right by her child. And those who have suffered depression -- or loved someone who has -- will find much to inspire in this compelling redemption story.”
— People

“Charming . . . Colvin chronicles an impressive array of accompanists and backup, two husbands, and myriad awards such as her gold record with the 1997 hit “Sunny Came Home,” all while maintaining a low-key, sweet humility that is truly endearing.”
— Publishers Weekly

“Dspite the many personal disasters that have beset Colvin, DIAMOND IN THE ROUGH is no misery-fest. It’s with an impressive absence of self-pity and a dry, unassuming style that she teases humour out of the most unpalatable episodes . . . Absorbing.”
— The Independent on Sunday

“Engaging . . . .The many admirers of Colvin’s music will appreciate this honest memoir.”
— Booklist

Shawn Colvin is a singer-songwriter and musician. She began performing in bands in the late 1970s, and after years of polishing her skills in Austin, Texas, and the New York folk scene, Colvin released her debut album Steady On in 1989, earning a Grammy Award for Best Contemporary Folk Album. Her breakthrough success was the album A Few Small Repairs in 1996, featuring the song "Sunny Came Home," a top-ten hit that won Grammys for Record of the Year and Song of the Year. Colvin has released ten albums, won three Grammy Awards, and been nominated for seven others.