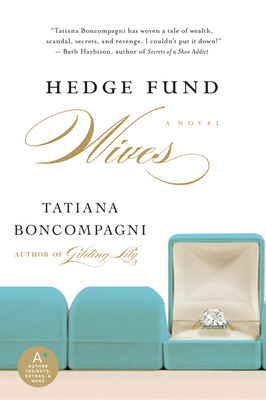 In this amazingly timely story about what the wealthy do when Wall Street lays an egg, the author of Gilding Lily once again delivers a witty and insightful treatment of today's woman, as she explores the sacrifices they make, the bargains they strike, the rules they follow, and what happens when it all starts to fall apart.

Who could have guessed that Wall Street would go south just as Marcy Emerson and her husband moved east? Down to earth Marcy relocated from Chicago to New York when her husband was offered a big time job as a hedge fund manager.

She gives up her own job—after all, hedge fund wives don't work! And while at first it's fun to shop all day and party all night, Marcy quickly learns that life among the rich can be anything but easy and that behind every smile can be a stab in the back.

Still, it's not until her husband leaves her for his thinner, blonder mistress—a woman who is higher up the social ladder than the original Mrs. Emerson will ever be—that Marcy decides to stand on her own two feet once again, and fight for the things that are far more important than money.

Tatiana Boncompagni, author of the novel Gilding Lily, is a Manhattan-based freelancer who has written for The Financial Times Style and Shopping pages, the New York Times Sunday Styles section, the Wall Street Journal Weekend section, Vogue and InStyle. A graduate of Georgetown University's prestigious School of Foreign Service, she worked for the Wall Street Journal Europe in Brussels, and, later, as a reporter for the Legal Times in Washington, DC. She currently lives in New York City with her husband and two children.

“Gossip Girl on Fifth Avenue. Tatiana Boncompagni has woven a tale of wealth, scandal, secrets, and revenge. I couldn’t put it down!”
— Beth Harbison, author of Secrets of a Shoe Addict

“A wickedly amusing glimpse into the mores and manners of the rich and richer.”
— Linda Francis Lee, bestselling author of The Ex-Debutante

“Marcy is a strong character who rises above the crowd in Boncompagni’s glitzy and gossipy second novel.”
— Booklist

“Readers fascinated by Upper East Side life will be mesmerized by Boncompagni’s sparkling depiction and may have to fight the temptation to read it all in one sitting.”
— Publishers Weekly

“Boncompagni gives us a glimpse into one of the world’s most exclusive clubs--blemishes and all.”
— Brilliant Magazine
or
Buy Here
Copyright © 2020 American Booksellers Association