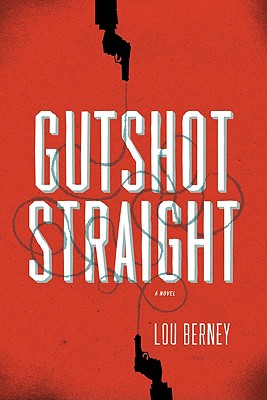 “Lou Berney’s novel is so energetic, so droll, and so wheezingly funny that it accomplished what no book ever has before: it made me forget to eat lunch.”
—Stephen Harrigan, New York Times bestselling author of Challenger Park

A fast and funny caper in the tradition of Elmore Leonard, Carl Hiaasen, and the Coen Brothers, Gutshot Straight brings a fresh new talent into the crime fiction fold: Louis Berney. He’s already won raves for his short fiction collection The Road to Bobby Joe and Other Stories (“Rivals the work of contemporary hotshots T.C. Boyle and Ralph Lombreglia” —Chicago Tribune). With Gutshot Straight, Berney is “all in”—sure to win a fervent following with the story of “Shake” Bouchon, fresh out of prison and on the straight and narrow path…after maybe just one last job.

Lou Berney is the author of three previous novels, Gutshot Straight, Whiplash River, and multiple prize-winning The Long and Faraway Gone. His short fiction has appeared in publications such as The New Yorker, Ploughshares, and the Pushcart Prize anthology. He lives in Oklahoma City, Oklahoma.


Praise For Gutshot Straight: A Novel…

“Virtually every character is memorable, and the chemistry between Shake and Gina is brilliant. The plot turns are constant, and the dialogue is sharp. The bad guys are wonderfully scary, and the locales are vividly drawn. Elmore Leonard might be very pleased to call GUTSHOT STRAIGHT his own.”
— Booklist (starred review)

“GUTSHOT STRAIGHT has my vote for, among other things, Best McGuffin Ever. Just when you think it can’t get any weirder or quirkier, here comes the scene where... well, I better not give that away. Energetic, droll, and wheezingly funny.”
— Stephen Harrigan, New York Times bestselling author of Gates of the Alamo and Challenger Park

“An exciting read you can’t put down. A definite must read.”
— Abraham Rodriguez, 2009 Dashiell Hammett Award finalist and author of South by South Bronx
or
Not Currently Available for Direct Purchase
Copyright © 2020 American Booksellers Association