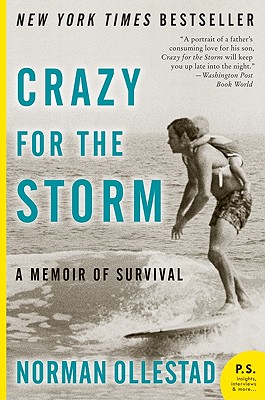 Crazy for the Storm

A Memoir of Survival

“Norman Ollstad's memoir of surviving a plane crash, in a howling winter storm high on the side of Ontario Peak in Southern California, is not merely a gripping story of an 11-year old boy's survival, but the bitter tale of a son's struggling to comprehend his father's death, the heroic story of his efforts, ultimately futile, to save his father's injured girl friend, and the saga of his wildly improbably descent of the mountain under horrendous conditions through astonishing presence of mind and perseverance. Greatly enriching this fascinating and well written account of survival are alternating chapters describing young Norman's complicated and confusing life growing up with his divorced mother and her live-in boyfriend on Topanga Beach, and his love-hate relationship with his proud and demanding father who, on skiing and surfing adventures in California and Mexico, constantly pushes him to--and sometimes beyond--the limits of his young physical and mental abilities. Struggling with post-survival guilt and the confusion of early adolescence, Norman comes to realize that it was the adversity his father made him confront that gave him the skills with which he survive his ordeal. The story's final challenge comes on a skiing trip to Mammoth Mountain, where his own father often took him as a boy, when the now grown Norman must confront the hopes he has for his own son, and decide how close to push him towards that thin line between safety and danger where lessons are learned. IN SUMMARY: Written in simple, almost matter-of-fact, but elegant prose, Crazy for the Storm is a coming-of-age story like you've never read, full of tragedy, beauty, struggle, adventure, and life-lessons--highly recommended for both adults and young adults, especially fathers and sons.”
— Gary Colliver, Windows on the World-Books & Art, Mariposa, CA
View the List

“Crazy for the Storm is a riveting account of survival. Norman Ollestad weaves the story of his unconventional early childhood and the details of a horrible airplane crash into a brilliant tribute to his adventurous father.”
— Jamie Robinson, Bestsellers Books & Coffee Co., Mason, MI
View the List

Destined to stand with other classic true stories of man against nature—Into Thin Air and Into the Wild by Jon Krakauer; Sebastian Junger’s The Perfect Storm—Crazy for the Storm is a literary triumph.

Norman Olstead's New York Times bestselling memoir is the story of the harrowing plane crash the author miraculously survived at age eleven, framed by the moving tale of his complicated relationship with his charismatic, adrenaline-addicted father.

“A heart-stopping story beautifully told….Norman Olstead has written a book that may well be read for generations.” —Russell Banks

“Breathtaking....Crazy for the Storm will keep you up late into the night.” —Washington Post Book World


Praise For Crazy for the Storm: A Memoir of Survival…

“An elegant memoir as well as a transformative coming-of-age tale. When he leaves his father’s limp body behind on the icy plateau—giving it a final kiss and caress as it’s claimed by the snow—Ollestad takes his first perilous steps not just into survival, but into adulthood.” — New York Post

“Cinematic and personal . . . Ollestad’s insights into growing up in a broken home and adolescence in southern California are as engrossing as the story of his trip down the mountain.” — Chicago Tribune

“Breathtaking...A portrait of a father’s consuming love for his son, Crazy for the Storm will keep you up late into the night.” — Washington Post Book World

“The memoir is as much about a father-son relationship as it is a survival story...Ollestad says his father’s life philosophy about surfing and skiing - ‘knowing there’s always a place to go and find peace, clear your mind’ - got him down the mountain and through life.” — USA Today

“A page-turning adventure tale . . . and a meditation on manhood.” — Los Angeles Magazine

“At times beautiful, at times heart-wrenching, Crazy for the Storm is a commanding read--a tale that proves the power of the human spirit can rise against any challenge, and a father’s legacy can be more than he imagines. — BookPage

“Crazy for the Storm is an absolutely compelling book which I read in one long sitting. The fact that it’s true made me shudder, but then Norman Ollestad is a fine writer and every detail is convincing.” — Jim Harrison

“Extraordinary—an adventure story with a rich psychological foundation from an enormously talented author. Crazy for the Storm is a powerful book. It deserves to be a bestseller.” — Pulitzer Prize–winner Lucinda Franks, author of My Father's Secret War

“As much a thriller as a memoir . . . gorgeously written, perfectly controlled.” — Carolyn See

“A heart-stopping adventure that ends in tragedy and in triumph, a love story that fearlessly explores the bond between a father and son and what it means to lead a life without limits.” — Susan Cheever

“A book that may well be read for generations. It’s a book that fathers should give to their sons, but sons should give it to their fathers, too . . . mothers, wives, sisters and daughters: read it and weep for all the boys and men you have ever loved.” — Russell Banks

“Engrossing...Ollestad hits several notes that should make his memoir irresistible to those looking for page-turning but thought-provoking summer reading along the lines of Jon Krakauer’s Into Thin Air (1997)…Deep and resonant.” — Kirkus Reviews

“Never a dull moment....[Ollestad has] written a beautiful story about a thrill-loving father — ‘the man with the sunshine in his eyes’— who taught his boy not just how to live, but how to thrive.” — Houston Chronicle

Norman Ollestad studied creative writing at UCLA and attended UCLA Film School. He grew up on Topanga Beach in Malibu and now lives in Venice, California. He is the father of a nine-year-old son.