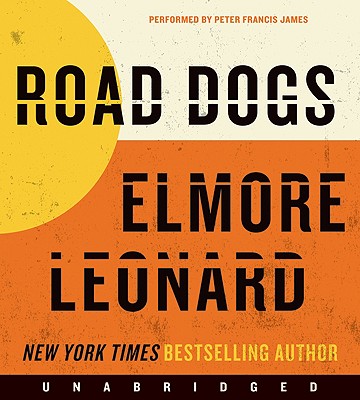 Legendary New York Times bestselling author Elmore Leonard returns with three of his favorite characters: Jack Foley from Out of Sight, Cundo Rey from Labrava, and Dawn Navarro from Riding the Rap.

Jack Foley is serving a thirty-year sentence in a Miami penitentiary, but he's made an unlikely friend on the inside who just might be able to do something about that. Fellow inmate Cundo Rey, an extremely wealthy Cuban criminal, arranges for Foley's sentence to be reduced from thirty years to three months, and when Jack is released just two weeks ahead of Cundo, he agrees to wait for him in Venice Beach, California.

Also waiting for Cundo is his common-law wife, Dawn Navarro, a professional psychic with a slightly ulterior motive for staying with Cundo: she wants his money. And with the arrival of Jack, she sees the perfect partner in a plan to relieve Cundo of his fortune. Cundo may be Jack's friend, but does that mean he can trust him? And can either of them trust Dawn?

Road Dogs is Elmore Leonard at his best and readers will love seeing Cundo, Jack, and Dawn back in action and working together . . . or are they?