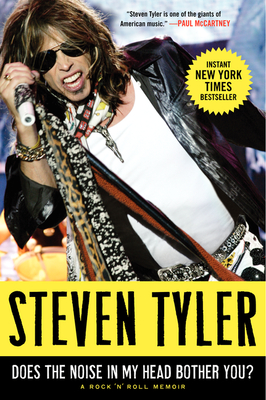 Does the Noise in My Head Bother You?


Praise For Does the Noise in My Head Bother You?: A Rock 'n' Roll Memoir…

“[Tyler] offers a colorful glimpse into his head as well as his life.... It’s got everything you want from a guilty pleasure: obscenity, revelation, bad behavior and humor. And, oh yeah, a beat you can dance to.”
— NPR's All Things Considered

“[A] colorful all-access pass to the rocker’s storied past…replete with hilarious Tylerisms, tales of debauchery and detox and Aerosmith’s fabled climb to superstardom...as well as warmer memories of relationships with his children, wives and friends...particularly Tyler’s toxic tangles with guitarist Joe Perry.”
— USA Today

“Steven Tyler has a way with words…Does the Noise in My Head Bother You? Is 376 pages of pure, unfiltered Tyler…Noise is compelling stuff…Tyler’s at times gripping, often hilarious voice keeps things moving….”
— Rolling Stone

“Steven Tyler is one of the giants of American music, who’s been influential for a whole generation of Rock-n-Roll fans around the world. Long May He Rock!”
— Sir Paul McCartney

“[Tyler’s] forays into music theory are absorbing snapshots of what goes into making great songs. When Tyler is able to articulate what went into Aerosmith’s music, the book becomes fascinating.”
— Washington Post

“[Tyler] delivers the goods…[his] surprisingly insightful and entertaining voice brings the familiar contours of this story alive.... What on the surface seems clichéd...manages somehow to rise above that and be a fun ride [and] separates a Rock Star from a merely ordinary pop star.”
— The Hollywood Reporter

“Roll ‘em: Tyler’s memoir is a wild ride. Explicit and filled with expletives, it reads like an even wilder and louder version of Richards’ best-selling “Life.” Tyler, 63, settles back and tells story after story about life in the “most decadent, lecherous, sexiest, nastiest band in the land.””
— Lisa Ko, author of The Leavers

“One of the book’s charms is Tyler’s lack of guilt or regret for anything in his life…Music fans will enjoy Tyler’s remembrances of the New York scene, dating from clubs like The Scene and Max’s Kansas City.”
— New York Daily News

“Strewn thought the book …are dozens of patented “Tylerisms” that can only come from his well-endowed motor-mouth.”
— Houston Chronicle

“Explicit and filled with expletives, the memoir—titled Does the Noise in My Head Bother You?—reads like an even wilder and louder version of Richards’ best-selling Life.”
— The Oregonian (Portland)

“At turns completely hilarious, surprisingly (perhaps, to some) coherent, poignant and sordid -- a heart-rending read. Once you’ve started it, putting it down is not an option. It would be easier to ignore Tyler from the front row of an Aerosmith concert.”
— Buffalo News