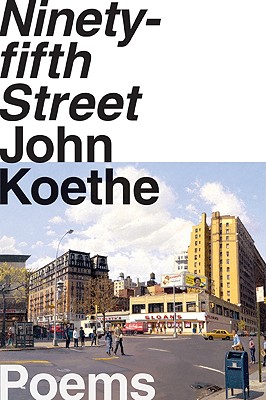 A Harper Perennial paperback original, Ninety-fifth Street is a beautiful new collection of poems by John Koethe, acclaimed by poet Edward Hirsch as an heir to Wallace Stevens. In this, his eighth book of poems, Koethe, the author of North Point North and Falling Water, offers readers the reflections of a poet in mid-life, an “aging child of 62,” passionately engaged with the world yet drawn to meditate on memory, time, and the mysteries of human existence.

“His best book yet...accessible and surprisingly powerful poems....you sense that Koethe slowly approaches death the way that he does life—with an unusual and infectious lightness.”
— Time Out New York

John Koethe is distinguished professor of philosophy emeritus at the University of Wisconsin-Milwaukee and the first Poet Laureate of Milwaukee. His collections include Falling Water, which won the Kingsley-Tufts Award, North Point North, a finalist for the Los Angeles Times Book Prize, and Ninety-fifth Street, winner of the Lenore Marshall Prize. In 2011, he received a Literature Award from the American Academy of Arts and Letters. He lives in Milwaukee, Wisconsin.
Loading...
or support indie stores by buying on