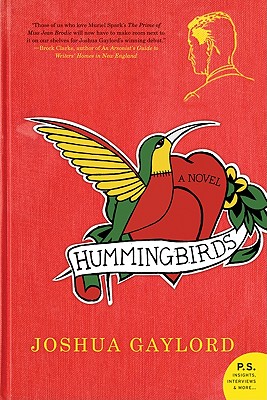 “Joshua Gaylord has written a smart and edgy debut about life in a New York City all-girls prep school, a brilliant upstairs/downstairs take on the school that gives every character his or her introspective spotlight without losing the story's momentum. Astounding.”
— David Mallmann, Next Chapter Bookshop, Mequon, WI
View the List

"Those of us who love Muriel Spark's The Prime of Miss Jean Brodie will now have to make room next to it on our shelves for Joshua Gaylord's winning debut." —Brock Clarke, author of An Arsonist's Guide to Writers' Homes in New England

"Hummingbirds positively glistens with erudition and insight. Whether writing about prep school girls or the adult men who walk among them, Gaylord's stunning writing elevates his subject matter with equal parts humanity and elegance." —Jonathan Tropper, author of This Is Where I Leave You


Praise For Hummingbirds: A Novel…

“[A] winning debut . . . Lush language . . . A very grown-up novel about adolescence and the folly of adults, by an impressive new voice in American fiction.” — Kirkus Reviews (starred)

“Gaylord has delivered a story that’s ripe with acute and wry observations on men and women, competition, sexuality, and secrets.” — Library Journal

“The complicated web of loyalties, attraction, competition and camaraderie [in HUMMINGBIRDS] provides much tension as things play out—but not in an expected way. . . . Gaylord’s tale of overeducated men and the teenage students who exhibit the finesse and understanding their teachers lack hits all the right notes.” — Publishers Weekly

“HUMMINGBIRDS is a sly, charming novel about the students at a Manhattan girls’ school and the adults who sometimes remember to teach them. Joshua Gaylord’s winning debut.” — Brock Clarke, author of An Arsonist’s Guide to Writers’ Homes in New England

“Hummingbirds positively glistens with erudition and insight. Whether writing about prep school girls or the adult men who walk among them, Gaylord’s stunning writing elevates his subject matter with equal parts humanity and elegance.” — Jonathan Tropper, author of This Is Where I Leave You

“Keenly plotted and psychologically acute, this novel thrums with deceptions great and small— what we don’t tell each other, and what we won’t admit to ourselves.” — Ed Park, author of Personal Days

Joshua Gaylord has taught at an Upper East Side prep school for the past ten years. He also teaches literature and cultural studies as an adjunct professor at the New School. He lives in New York.

Two rivalries are at the heart of Hummingbirds: the competition between Dixie Doyle and Liz Warren, and the popularity battle between Leo Binhammer and Ted Hughes. What similarities do these characters share? How are they different? Did you favor one over another? Why?

The school portrayed in the novel is an exclusive private all-girls institution. Why do you think the author chose this as the setting? Would the events have had the same resonance in a coed public school?

After hearing his wife’s confession, Binhammer states that “he suddenly thought of himself as a character in a book.” What do you think he was expecting to happen when he sets off on his course of revenge, of confrontation, of reconciliation? Was he being realistic? In what ways might he have been disappointed with the outcome? How does his view of himself (or what he wants himself to be) affect his actions?

Binhammer and Ted Hughes may be the big men on campus, but discuss the ways in which the women of the book–Sarah, Sibyl, Dixie, Liz–shape the direction of the two men’s lives.

After Binhammer’s masterminded plan to bring his wife and Ted Hughes together shatters the illusion “that he could maintain the delicate balance forever,” Binhammer muses that he feels like a little boy at a wedding, causing a scene for attention. How do you see the lines between boy and man, girl and woman defined in this novel? Are there scenes in which you can see the characters actually fluctuating back and forth?

Liz sends a poem to Hughes, who in turn sends it to Binhammer. Why? What is the importance of the poem and how does reflect the relationships between these three characters? Why do you think Dixie, the fourth main character, is left out of this exchange?

Were you satisfied with Ted Hughes’s departure at the end of the story? Did you feel he deserved stricter punishment? Was he entirely to blame for his involvement with Liz? How would you characterize Binhammer’s response to Hughes’s downfall and departure, and why do you think he responds the way he does?

Liz Warren claims at the end of the novel that she thought seeing the adult world would be like seeing Oz—everything would be in color. What do you make of the adult world here versus the world of adolescence? Does one seem brighter? Do you think the teachers at Carmine-Casey have nostalgia for adolescence, or no?