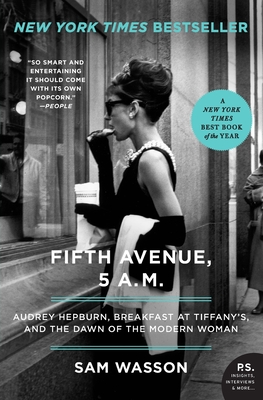 Audrey Hepburn, Breakfast at Tiffany's, and the Dawn of the Modern Woman

“A bonbon of a book… As well tailored as the little black dress the movie made famous.” – Janet Maslin, New York Times

Fifth Avenue, 5 A.M. by Sam Wasson is the first ever complete account of the making of Breakfast at Tiffany’s. With a cast of characters including Truman Capote, Edith Head, director Blake Edwards, and, of course, Hepburn herself, Wasson immerses us in the America of the late fifties, before Woodstock and birth control, when a not-so-virginal girl by the name of Holly Golightly raised eyebrows across the nation, changing fashion, film, and sex, for good.

With delicious prose and considerable wit, Wasson delivers us from the penthouses of the Upper East Side to the pools of Beverly Hills presenting Breakfast at Tiffany’s as we have never seen it before—through the eyes of those who made it.


Praise For Fifth Avenue, 5 A.M.: Audrey Hepburn, Breakfast at Tiffany's, and the Dawn of the Modern Woman…

“A bonbon of a book . . . as well tailored as the little black dress the movie made famous.” — Janet Maslin, New York Times

“So smart and entertaining it should come with its own popcorn.” — People

“This splendid new book is more than a mere ‘making-of’ chronicle. Wasson has pulled it off with verve, intelligence, and a consistent ring of truth...compulsively readable. Fifth Avenue, 5 A.M. is both enjoyable and informative: everything a film book ought to be.” — Leonard Maltin, author of Leonard Maltin's 151 Best Movies You've Never Seen

“A fascination with fascination is one way of describing Wasson’s interest in a film that not only captures the sedate elegance of a New York long gone, but that continues to entrance as a love story, a style manifesto, and a way to live.” — New York magazine

“Crammed with irresistible tidbits…[Wasson’s] book winds up as well-tailored as the kind of little black dress that Breakfast at Tiffany’s made famous.” — New York Times

“Fifth Avenue, 5 A.M. offers lots of savory tidbits [from the making of Breakfast at Tiffany’s]. Mr. Wasson brings a lively and impudent approach to his subject.” — Wall Street Journal

“Sam Wasson is a fabulous social historian. . . . [Fifth Avenue, 5 AM] is as melancholy and glittering as Capote’s story of Holly Golightly.” — The New Yorker

“A brilliant chronicle of the creation of Breakfast at Tiffany’s. Wasson has woven the whole so deftly that it reads like a compulsively page-turning novel. This is a memorable achievement.” — Peter Bogdanovich

“Wasson’s story is part encyclopedia, part valentine, and worth reading just to find out what exactly went into making the amazing party scene.” — The Huffington Post

“Wasson offers enough drama to occupy anyone for days...The whole thing reads like a cool sip of water.” — Daily News

“A breezy tale of dresses and breakfast pastries, this is not.... The subtexts of Breakfast at Tiffany’s—materialism, sexual freedom—were decidedly more complicated.” — Women's Wear Daily

“Rich in incident and set among the glitterati of America’s most glamorous era, the book reads like a novel…[Wasson] has assembled a sparkling time capsule of old Hollywood magic and mythmaking.” — Kirkus Reviews

“The anecdotes are numerous and deftly told. This well-researched, entertaining page-turner should appeal to a broad audience, particularly those who enjoy film history that focuses on the human factors involved in the creative process while also drawing on larger social and cultural contexts.” — Library Journal

“Reading a book about a movie is seldom as entertaining as watching the film, but Wasson’s is the rare exception.” — Christian Science Monitor

“Sam Wasson’s exquisite portrait of Audrey Hepburn peels backs her sweet facade to reveal a much more complicated and interesting woman. He also captures a fascinating turning point in American history— when women started to loosen their pearls, and their inhibitions. I devoured this book.” — Karen Abbott, author of Sin in the Second City

“Audrey Hepburn dances through the pages of Sammy Wasson’s portrait of a movie and a little black dress that were game changers at the dawn of the sixties. Both juicy and informative, Fifth Avenue, 5 A.M. provides the inside story while giving Hepburn her due as a true modern original.” — Molly Haskell, author of Frankly, My Dear: Gone with the Wind Revisited

Sam Wasson is the author of six previous books on Hollywood including the New York Times bestsellers Fifth Avenue, Five A.M.: Audrey Hepburn, Breakfast at Tiffany’s, and the Dawn of the Modern American Woman and The Big Goodbye: Chinatown and the Last Days of Hollywood, and Fosse, the basis for the limited series “Fosse/Verdon.” With Jeanine Basinger, he is co-author of Hollywood: The Oral History. He lives in Los Angeles.