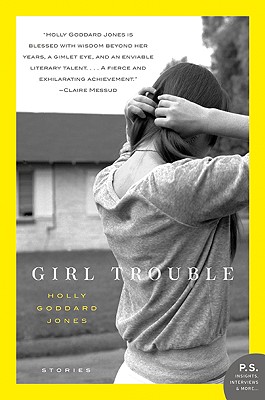 “This collection of eight stories, loosely linked by location, examines the pains and the losses of everyday existence, the consequences of bad decisions, and the ambiguities that make these decisions so difficult. Jones shows readers whole lifetimes in stories that are ultimately both humane and powerful.”
— Margaret Brennan Neville, The King's English, Salt Lake City, UT
View the List

In Girl Trouble, acclaimed writer Holly Goddard Jones examines small-town Southerners aching to be good, even as they live in doubt about what goodness is.

A high school basketball coach learns that his star player is pregnant--with his child. A lonely woman refIects on her failed marriage and the single act of violence, years buried, that brought about its destruction. In these eight beautifully written, achingly poignant, and occasionally heartbreaking stories, the fine line between right and wrong, good and bad, love and violence is walked over and over again.

In "Good Girl," a depressed widower is forced to decide between the love of a good woman and the love of his own deeply flawed son. In another part of town and another time, thirteen-year-old Ellen, the central figure of "Theory of Realty," is discovering the menaces of being "at that age": too old for the dolls of her girlhood, too young to understand the weaknesses of the adults who surround her. The linked stories "Parts" and "Proof of God" offer distinct but equally correct versions of a brutal crime--one from the perspective of the victim's mother, one from the killer's.

“Jones writes with grace and ease, the selections adding up to a powerful sum of reflection, loss and regret.” — Publishers Weekly

“Poignant and approachable-ripe for any audience. The human touch and prairie isolation of her characters are pitch perfect. . . . Jones’ prose is also sharply intellectual. With a debut as striking as Girl Trouble, Jones could very well join the tradition of America’s great Southern writers.” — New York Press

“Girl Trouble resonates with black-coal sorrow and dark truths found in [Jones’s] native state’s darkest hollers. . . . Nothing is contrived; every story is steeped in reality, and clarity comes with a price.” — The Nashville Scene

“Jones exposes a world that is darkly seductive.” — Oxford American

“Holly Goddard Jones is blessed with wisdom beyond her years, a gimlet eye, and an enviable literary talent; her debut collection, GIRL TROUBLE, is a fierce and exhilarating achievement.” — Claire Messud, author of The Emperor’s Children

“No politician should ever again use the phrase ‘The American People’ without reading this book, preferably twice, so that they understand at last just who the hell they’re talking about. Holly Goddard Jones has a voice as expansive, complex, and beautiful as the country itself.” — Joshua Ferris, author of Then We Came to the End

“A grand debut of a writer who is assured, sensitive, and wonderfully skillful. . . . A marvelous work of heartbreaking wisdom.” — Edward P. Jones

“The stories from Girl Trouble are poignant and approachable-ripe for any audience. The human touch and prairie isolation of her characters are pitch-perfect. . . . Sharply intellectual. With a debut as striking as Girl Trouble, Jones could very well join the tradition of America’s great Southern writers.” — Las Vegas Weekly

Holly Goddard Jones's stories have appeared in New Stories from the South, Best American Mystery Stories, and various literary journals. She is an assistant professor at the University of North Carolina at Greensboro and the winner of a Rona Jaffe Foundation Writers' Award.