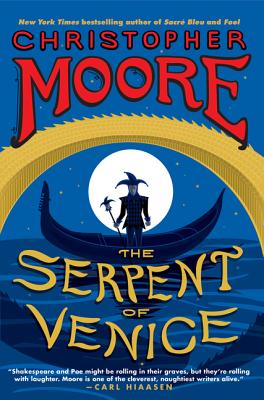 Venice, a long time ago. Three prominent Venetians await their most loathsome and foul dinner guest, the erstwhile envoy from the Queen of Britain: the rascal-Fool Pocket.

This trio of cunning plotters—the merchant, Antonio; the senator, Montressor Brabantio; and the naval officer, Iago—have lured Pocket to a dark dungeon, promising an evening of sprits and debauchery with a rare Amontillado sherry and Brabantio's beautiful daughter, Portia.

But their invitation is, of course, bogus. The wine is drugged. The girl isn't even in the city limits. Desperate to rid themselves once and for all of the man who has consistently foiled their grand quest for power and wealth, they have lured him to his death. (How can such a small man, be such a huge obstacle?). But this Fool is no fool . . . and he's got more than a few tricks (and hand gestures) up his sleeve.

Note: The book, too, is a veritable work of art. Rich creamy stock is enhanced by two-color printing, featuring part/chapter titles, running heads, and folios printed in red ink. The text block has blue-stained edges. The book opens to reveal two-page spread endpapers decorated with a sepia-toned antique map of Venice; an antique map of Italy graces the book’s front matter, printed in red. The jacket sports a matte finish with embossed author and title type; gold foil embellishes the title and illustration detail.

“Shakespeare and Poe might be rolling in their graves, but they’re rolling with laughter. Christopher Moore is one of the cleverest, naughtiest writers alive.”
— Carl Hiaasen, New York Times bestselling author of a whole bunch of excellent books, including Bad Monkey, Nature Girl, and Sick Puppy on THE SERPENT OF VENICE

“Fans who enjoyed the rollicking play within a play of Fool or the historical whimsy of Sacré Bleu will find many of the same gifts here . . . from one of America’s most original humorists.”
— Kirkus Reviews on THE SERPENT OF VENICE

“Fans of Fool will be overjoyed to rejoin Pocket and company . . . for their latest adventure, and newcomers will find that Shakespeare isn’t nearly as dry and dusty as they thought, at least not when Moore is at the helm.
— Library Journal (starred review) on THE SERPENT OF VENICE

Moore’s greatest asset is his skill with language. Readers with a certain Monty Python nerdiness will rejoice in its hundreds of insults . . . and jokes. . . . [W]itty and wise . . . Serpent is a bright, quick novel.” (3 out of 4 stars)
— USA Today on THE SERPENT OF VENICE

“The dialogue is extremely witty, and . . . you will laugh hard and find yourself hurling bawdy insults throughout the day, even if you don’t say them out lout.”
— Louisville Courier Journal on THE SERPENT OF VENICE

“Moore . . . is an excellent writer, and there are passages of prose—Pocket’s defense of Othello and the entire Pound-of-Flesh trial—that sparkle with Moore’s trademark wit and intelligence. Moore’s strength is his ability to appropriate supporting characters and make them wholly his own creations.
— Dallas Morning News on THE SERPENT OF VENICE

“To get a sense of the tone, imagine the merry pranksters of Monty Python in their heyday taking off on Shakespeare while simultaneously trying to break the record for F-bombs currently held by The Wolf of Wall Street.”
— Tampa Bay Times on THE SERPENT OF VENICE

“A gleeful and wonderfully strange mash-up. Shakespeare’s The Merchant of Venice, and Othello are its chief ingredients, with Edgar Allan Poe’s short story ‘The Cask of Amontillado’ thrown in. The result? An imaginative, wildly inspired satire.”
— Seattle Times on THE SERPENT OF VENICE

“[Moore] brings back one of his favorite characters, Pocket from 2009’s Fool. . . . Add a weirdly satisfying combo of literary in-jokes and low sex gags to the mix and what comes out of the Christopher Moore meat grinder is unique and sublime.”
— Fort Worth Star-Telegram on THE SERPENT OF VENICE

“The Serpent of Venice is a remarkable reimagining of classic literature, churned through historical backgrounds and research and set to a different drum. Tragedy becomes comedy in this side-splitting, hair-raising adventure. . . . A piece of literary gold.”
— Bookreporter.com on THE SERPENT OF VENICE