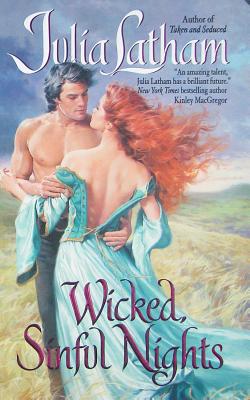 Though he′d been raised with his brothers by the League of the Blade as an experiment, Robert Hilliard is light-hearted, taking life as it comes. But the League doesn′t approve, and gives him one last chance to prove himself. A high member of the council has died, and the League believes his mistress, killed him. Robert must prove Sarah Audley′s guilt or lose his standing in the League. But when he encounters the red-haired beauty, Robert is convinced of her innocence and is determined to find the real murderer, no matter the price.

Sarah, a widow whose late husband′s family blamed her for his accidental death, doesn′t realize she′s suspected in the viscount′s death, a man who was a father figure to her--never her lover. She′s uneasy with her instant attraction to Robert, and when she learns his purpose to prove her guilt she knows she can never trust him...

Julia Latham has an abiding love for the Middle Ages, when knights were knights and ladies had to tame them. After several varied jobs, the last in computer programming, she realized her life's dream of being published with Avon Books. She lives in Central New York with her three children; her dog, Apollo; and her husband, Jim.