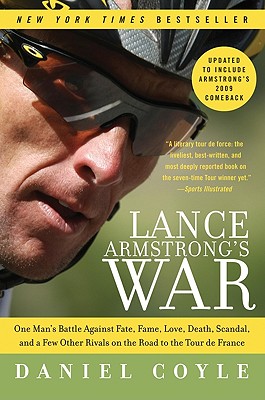 One Man's Battle Against Fate, Fame, Love, Death, Scandal, and a Few Other Rivals on the Road to the Tour de France

Daniel Coyne’s New York Times bestseller Lance Armstrong’s War takes a fascinating, in-depth  look at a staggeringly talented yet  flawed sports hero as he faced his greatest test: a record sixth straight Tour de France victory. Now with a new epilogue covering Armstrong's quest to win an 8th Tour de France, this “intimate, insightful, unflinching look at the greatest athlete of our time” (Jon Krakauer) explores the remarkable drive and accomplishments of a controversial champion—a must read for fans of John Feinstein and David Halberstam, as well as readers of Lance Armstrong’s own It’s Not About the Bike and Every Second Counts.


Praise For Lance Armstrong's War: One Man's Battle Against Fate, Fame, Love, Death, Scandal, and a Few Other Rivals on the Road to the Tour de France…

Daniel Coyle is the author of Hardball: A Season in the Projects and the novel Waking Samuel. He is a former editor at Outside and a two-time National Magazine Award finalist, and his work has been featured in The Best American Sports Writing. He lives in Alaska with his wife, Jen, and their four children.