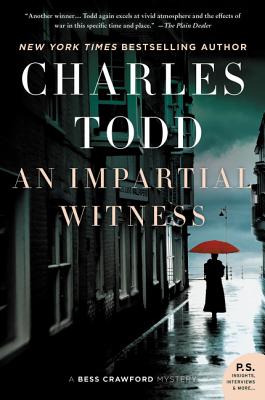 “Bess Crawford, World War I battlefield nurse, catches a glimpse of the wife of one of the wounded soldiers in her care in a desperate clutch at a train station. The wife is murdered later that day and Bess's patient is soon dead, also. What and whom did Bess see? Scotland Yard is soon in touch, and Bess can't let the memory go. The battlefield scenes are unforgettable, but it is the characters and suspense that drive this, the second in the excellent new series from the author of the Ian Rutledge Mysteries.”
— Becky Milner, Vintage Books, Vancouver, WA
View the List

“Readers who can’t get enough of [Jacqueline Winspear’s] Maisie Dobbs…are bound to be caught up in the adventures of Bess Crawford.”
—New York Times Book Review

To great critical acclaim, author Charles Todd introduced protagonist Bess Crawford in A Duty to the Dead. The dedicated World War I nurse returns in An Impartial Witness, and finds herself in grave peril when a moral obligation makes her the inadvertent target of a killer. As hauntingly evocative as Todd’s award-winning, New York Times bestselling Ian Rutledge novels, An Impartial Witness transports readers to a dark time of war and involves us in murder, intrigue, and the fascinating affairs of a truly unforgettable cast of characters.

“A superb whodunit—just when you think you have it figured out, Todd throws a curve—and a moving evocation of a world at war.” — Richmond Times-Dispatch on An Impartial Witness

“A book rich in atmosphere and dense with plot.” — St. Louis Post-Dispatch on An Impartial Witness

“Bess Crawford is a strong and likable character.” — Washington Times on An Impartial Witness

“A smartly plotted, well-told mystery.” — Booklist on An Impartial Witness

“Readers will enjoy Todd’s plucky, determined sleuth and a thrilling mystery that proves murders on the home front don’t stop just because there’s a war.” — Library Journal on An Impartial Witness

“This second book in the Bess Crawford series places this mother-son duo at the top of their plotting game, with intricate twists and plenty of viable suspects. The meticulously realized period detailing is an intrinsic part of a story that is much more than a whodunit.” — Romantic Times on An Impartial Witness