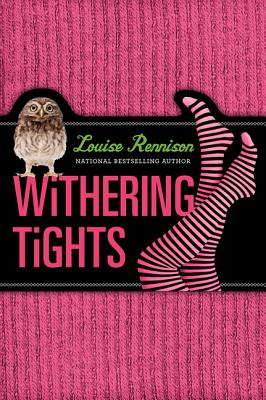 Wow. This is it. This is me growing up. On my own, going to Performing Arts College. This is good-bye, Tallulah, you long, gangly thing, and helloooooo, Lullah, star of stage.

Tallulah Casey is ready to find her inner artist. And some new mates. And maybe a boy or two or three. She's bound for a performing arts program in the wilds of the Yorkshire Dales—eerily similar to the windswept moors of Wuthering Heights.

Louise Rennison returns with her trademark wit, a hilarious new cast, and a heroine who is poised to discover plenty of opportunities for (mis)adventure!

PRAISE FOR WITHERING TIGHTS: “I don’t know how, but Louise Rennison has done it again. Tallulah is even funnier, warmer, and sweeter than her cousin Georgia Nicolson. I fell in love with Withering Tights, and you will too!” — Meg Cabot, author of The Princess Diaries and Abandon series

“Louise Rennison has created another superbly realistic and hilarious young teen heroine, a younger Georgia Nicolson, in the first book of a new series. Tallulah’s wry comments on her life and her dreams are sure to enchant girl readers who will laugh and cry with the spunky, hopeful entertainer.” — Voice of Youth Advocates (VOYA) (starred review)

“Tallulah is a vivacious and hilarious character who will speak to every girl. This is a wonderful start to a new series that will attract Georgia’s many fans as well as bring in new readers, who will fall in love with Tallulah and all of her quirks.” — School Library Journal

“Fans of Georgia Nicolson will be thrilled to meet her cousin Tallulah in Printz Honor-winner Rennison’s new madcap melodrama. Undeniably entertaining; Georgia would be pleased.” — Kirkus

“Absurdity is a key point here, and it’s richly delivered by Tallulah’s exploits. Ideal for readers seeking a high-spirited silly British romp.” — Bulletin of the Center for Children’s Books

“Tallulah is an effervescent protagonist who will keep fans of YA Brit lit laughing until the very end.” — Publishers Weekly

“This Brit lit romp through the moors will leave readers looking forward to next term and more Tallulah.” — The Horn Book

PRAISE FOR THE CONFESSIONS OF GEORGIA NICOLSON: “A little raunchy and quite funny.” — New York Times Book Review on The Confessions of Georgia Nicolson

“Hysterically funny.” — Seventeen on The Confessions of Georgia Nicolson

“Hilarious!” — USA Today on The Confessions of Georgia Nicolson

“Refreshing.” — San Francisco Chronicle on The Confessions of Georgia Nicolson

Louise Rennison was a British comedian and the internationally bestselling and award-winning author of the angst-filled Confessions of Georgia Nicolson series as well as the Misadventures of Tallulah Casey series. Her first novel, Angus, Thongs and Full-Frontal Snogging, received a Michael L. Printz Honor Award in 2001, was adapted into a feature film, and has become a worldwide bestseller now translated into 34 languages. She was also awarded the Roald Dahl Funny Prize for the first book in her Tallulah Casey series, Withering Tights.