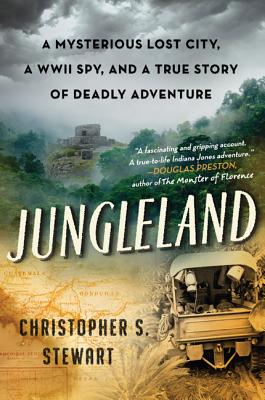 A Mysterious Lost City, a WWII Spy, and a True Story of Deadly Adventure

"I began to daydream about the jungle...."

On April 6, 1940, explorer and future World War II spy Theodore Morde (who would one day attempt to assassinate Adolf Hitler), anxious about the perilous journey that lay ahead of him, struggled to fall asleep at the Paris Hotel in La Ceiba, Honduras.

Nearly seventy years later, in the same hotel, acclaimed journalist Christopher S. Stewart wonders what he's gotten himself into. Stewart and Morde seek the same answer on their quests: the solution to the riddle of the whereabouts of Ciudad Blanca, buried somewhere deep in the rain forest on the Mosquito Coast. Imagining an immense and immaculate El Dorado–like city made entirely of gold, explorers as far back as the Spanish conquistador Hernán Cortés have tried to find the fabled White City. Others have gone looking for tall white cliffs and gigantic stone temples—no one found a trace.

Legends, like the jungle, are dense and captivating. Many have sought their fortune or fame down the Río Patuca—from Christopher Columbus to present-day college professors—and many have died or disappeared. What begins as a passing interest slowly turns into an obsession as Stewart pieces together the whirlwind life and mysterious death of Morde, a man who had sailed around the world five times before he was thirty and claimed to have discovered what he called the Lost City of the Monkey God.

Armed with Morde's personal notebooks and the enigmatic coordinates etched on his well-worn walking stick, Stewart sets out to test the jungle himself—and to test himself in the jungle. As we follow the parallel journeys of Morde and Stewart, the ultimate destination morphs with their every twist and turn. Are they walking in circles? Or are they running from their own shadows? Jungleland is part detective story, part classic tale of man versus wild in the tradition of The Lost City of Z and Lost in Shangri-La. A story of young fatherhood as well as the timeless call of adventure, this is an epic search for answers in a place where nothing is guaranteed, least of all survival.

Christopher S. Stewart is an investigative reporter at the Wall Street Journal, where he shared a 2015 Pulitzer Prize for Investigative Reporting. His work has appeared in GQ, Harper’s, New York Times Magazine, New York, The Paris Review, Wired, and other publications, and he also served as deputy editor at the New York Observer and is a former contributing editor at Condé Nast Portfolio. Stewart is the author of Hunting the Tiger and Jungleland. He lives with his family in New York.


Praise For Jungleland: A Mysterious Lost City, a WWII Spy, and a True Story of Deadly Adventure…

“This stunning book takes you deep into the jungles of Honduras, telling a story that explains all of Europe’s adventures on this side of the world: the quest for a lost city full of gold, a search that, in theend, reveals the treasure to be the journey itself. ”
— Rich Cohen

“A bold attempt to solve the mystery of the White City of Honduras and finish the work of a World War II spy.… a rip-snorting journey… Readers who loved ‘The Lost City of Z’ have found their next great true adventure.”
— Mitchell Zuckoff

“I dare you to put this book down.”
— Evan Wright

“A great revival of an older genre, the treasure hunt, and associated adventures.”
— Kirkus Reviews

“The premise is so fantastic that if Jungleland were a novel, you could be forgiven for worrying that it might be a bit pulpy or clichéd…The fact that this is all true turns the story from one of intrigue and odyssey into one of anthropological significance as well.”
— Daily Beast

“The true story [of] Jungleland resembles nothing so much as the set-up for one of H. Rider Haggard’s old pulp adventure novels.…Stewart is a crisp, lean, colorful stylist, with that essential knack: a nose for punchy, telling anecdotes and images…great fun to read.”
— Laura Miller, Salon

“[T]his is a gritty, remarkable tale of exploration and risk in a nervy trek to the edge of civilization.”
— Publisher's Weekly (Starred Review)
or
Not Currently Available for Direct Purchase
Copyright © 2020 American Booksellers Association