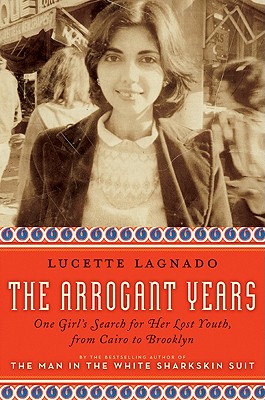 One Girl's Search for Her Lost Youth, from Cairo to Brooklyn

In this much-anticipated new memoir, Lucette Lagnado revisits her first years in America, first in Brooklyn, then at Vassar and Columbia, revealing a coming-of-age interrupted by a bout with cancer at age 16. Its devastating consequences would rob her of her ability to have children and of her "arrogant years" -the years defined by their overwhelming sense of possibility, invincibility, and confidence-leaving her with the lonely echo of her own fears and judgment: "I am not woman enough." Lagnado looks to the women sequestered behind the wooden screen at her childhood synagogue, to the young co-eds at Vassar in the 1970s, to her own mother and the women of their past in Cairo, and reflects on their stories as she struggles to heal, to make the leap from girl to woman without the grace and strength of her "arrogant years."

"Lagnado traces her mother's heartbreaking trajectory from the Pasha's library in King Farouk's Cairo to the confines of a working-class neighborhood in Brooklyn, where she tries to reconstruct her vanished home. If doing so proved impossible for the persevering Edith, Lagnado's memoir, at once an elegy to a parent and to a country, comes close."-Dalia Sofer, author of The Septembers of Shiraz

Praise For The Arrogant Years: One Girl's Search for Her Lost Youth, from Cairo to Brooklyn…

“[E]nchanting…It’s risky to write a second memoir about the same time period, but in Lagnado’s hands, the result feels natural and right. She skillfully reminds us that a single human life is infinitely complex, that there are as many sides to a story as times it is told.”
-New York Times Book Review

“The Arrogant Years [is] a paragon of memoir writing, a story about the complex swirl of people and events and forces out of which individual lives are made — some, like Ms. Lagnado’s, more painfully, but also more fully, than others.”
-New York Times

“[A] taut and moving memoir…With a journalist’s economy of style and an intuitive sense of story, [Lagnado] weaves an account of her own arrogant years.... [A] meditation on exile and assimilation, feminism and the enduring ties of family.”
-San Francisco Chronicle

“With precision and searing honesty, Lucette Lagnado writes in The Arrogant Years about her torn allegiances as both an Egyptian Jew growing up in America in the 1960s and ‘70s and the youngest daughter of unhappily married parents.”
-O, The Oprah Magazine

“Lagnado is at her best when she plumbs her own psyche to sort out her life’s ups and downs…a rewarding journey.”
-Washington Post

“[A]ffecting…Lagnado writes with great affection and compassion for her mother, and she describes displacement and the urgency of memory. Readers... of Sharkskin will again be moved…. It is also a portrait of awe-inspiring caregiving by a loving daughter.”
-Jewish Week
-Boston Globe

“From Pashas to paupers, from the alleyways of Cairo to the working class streets of Brooklyn, this epic family saga of faith and fragility showcases Lucette – nicknamed Loulou by her family—as a budding contrarian in her alien New World.”
-Jewish Woman Magazine, Book of the Month

“This moving follow-up [to The Man in the White Sharkskin Suit] revolves around Lagnado and her mother, both of them battling their fates and coming of age in times of social change.”
-New York Times Book Review, Paperback Row

“Weaves together the life stories of several women in a way that will resonate with readers of any ethnicity…Lagnado’s done a fabulous job, again, of transporting us to a multi-ethnic Cairo that no longer exists. That alone is worth the price of admission.”
-Library Journal

“You don’t have to be Jewish to take this entrancing literary ride…. The Arrogant Years is a lovely book, sad and hilarious by turn, written with love of life, and an enormous affection for language. You will love it too.”
-Malachy McCourt, New York Times bestselling author of A Monk Swimming

“In the radiant presence of Lucette Lagnado herself--and in The Arrogant Years, her moving and unsparingly revelatory second memoir… we have honesty as purity of style, and lucidity as burning emotion, and history as an enduring hymn to resilience.”
-Cynthia Ozick

“[A] frank and searching chronicle of lost and found dreams… Lagnado is spellbinding and profoundly elucidating in this vividly detailed and far-reaching family memoir of epic adversity and hard-won selfhood.”
-Booklist (starred review)