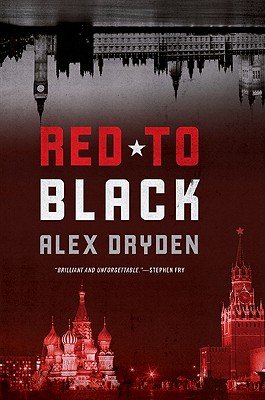 “This terse spy thriller will sweep you through the shadowy halls of post-Soviet Russian history right up to today's rejuvenated petrostate under Vladimir Putin's iron rule. It does so through the eyes of Anna, the youngest female colonel in the KGB, who has been ordered to get close to MI6's key man in Moscow and his mole. The gripping pace will pull you along into blacker and blacker depths of intrigue.”
— Ben Gaunt, Bookshelf At Hooligan Rocks, Truckee, CA
View the List

“Red to Black has more in common with the elegantly paced books of John le Carré than it does with Ian Fleming’s James Bond novels. But readers who appreciate a healthy dose of real-world worries in their spy novels won’t complain.”
—Richmond Times-Dispatch

Gorky Park for the Putin era, Red To Black by Alex Dryden could have been ripped from recent headlines. At once a spy thriller, a love story, and a chilling look at a dangerously resurgent superpower, it is a masterful work that Stephen Fry calls, “Brilliant and unforgettable….Nothing short of miraculous.” Welcome to the New Russia.


Praise For Red to Black…

“Prescient . . . [Red to Black] depicts a frightening and ruthless Russia, which answers to nobody.”
— The Economist

“Terrifying, quite frankly . . . chillingly unputdownable—everything you didn’t want to know about Putin but were afraid to ask.”
— Emma Thompson

“Alex Dryden’s brilliant and unforgettable novel has told me more about the making of modern Russia than I could learn from all books of journalism and contemporary history combined...nothing short of miraculous.”
— Stephen Fry

“An exceptional novel by any standard; readers who enjoy a love story mixed with their espionage (à la le Carré‘s The Little Drummer Girl) will appreciate.”
— Library Journal (starred review)

“Dryden has written a superb spy novel....the warning bell that “Red to Black” sounds against Putin’s Russia has a powerful ring, especially when it turns to the KGB.”
— Richmond Times-Dispatch