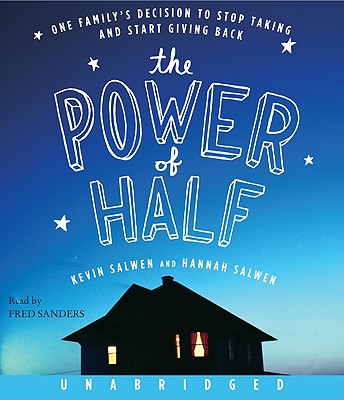 The Power of Half CD

It all started when 15-year-old Hannah Salwen, idealistic but troubled by a growing sense of injustice in the world, had a eureka moment when a homeless man in her neighborhood was juxtaposed against a glistening Mercedes coupe. “You know, Dad,” she said, pointing, “If that man had a less nice car, that man could have a meal.”

This glaring disparity led the Salwen family of four, caught up like so many other Americans in this age of consumption and waste, to follow Hannah’s urge to stop talking and start doing. And so they embarked on an incredible journey together, deciding to sell their Atlanta mansion, downsize to a house half its size, and give half of their profits to a worthy charity. Each week they met over dinner to discuss their plan. At first it was an outlandish scheme. “What, are you crazy? No way!” Then it was a challenge. “We are TOTALLY doing this.” It would transport them across the globe and well out of their comfort zone. In the end they found a needy village in Ghana where their commitment of funds and their unwavering follow-through would change lives of hundreds, for good. It would also alter irrevocably the lives of four normal Americans who learned together that half could be so much more.

With deft prose, an unassuming tone, and an endearing sense of humor, The Power of Half chronicles this remarkable, unlikely journey, this reimagining of the American dream, one family at a time. It also offers readers a very accessible road map to employ the power of half to their own lives, no matter one’s means or resources. In that way, it shows readers how to connect their families through a unifying purpose, an antidote to the splintering of American families in this era of iPods, video-gaming, and other solo activities.

Kevin Salwen was a reporter and editor at the Wall Street Journal for more than eighteen years. After that, he started a magazine, Motto. He has served on the board of Habitat for Humanity in Atlanta and works with the U.S. Olympic Committee.

Hannah Salwen is a junior at the Atlanta Girls' School, where she is a member of the varsity volleyball team, coeditor of the school yearbook, and a representative on the student council. She has been volunteering since the fifth grade at the Atlanta Community Food Bank, Café 458, and other nonprofits.