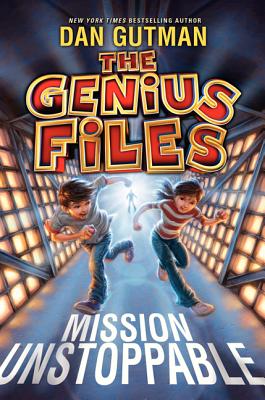 “Prolific and popular author Gutman begins a new series filled with funny and crazy characters and an outlandish plot. Twelve-year-old twins Coke and Pepsi McDonald discover a secret government plot to use YAGs, or 'Young American Geniuses' to help solve the nation's problems - and they're both on the list!”
— Michele Bellah, Copperfield's Books, Sebastopol, CA
View the List

The most exciting road trip in history begins! In this action-packed, New York Times bestselling adventure, twelve-year-old twins Coke and Pepsi McDonald embark on a family vacation you'll have to read to believe.

Coke McDonald and his twin sister, Pepsi, think their family’s cross-country RV vacation is nothing to get excited about...until they’re chased off a cliff, locked in a burning school, and receive mysterious messages in codes and ciphers. From California to Wisconsin, it’s a race against time to find out who’s after Coke and Pep, who’s leaving the notes...and just what being a part of The Genius Files entails!

With the real-kid humor that has earned Dan Gutman millions of fans around the world, and featuring weird-but-true American tourist destinations, The Genius Files is a one-of-a-kind mix of geography and fun.

As Coke and Pep dodge nefarious villains from the Pez museum in California all the way to the Infinity Room in Wisconsin, black-and-white photographs and maps put young readers right into the action.

And don't miss the next leg of the journey in The Genius Files: Never Say Genius!