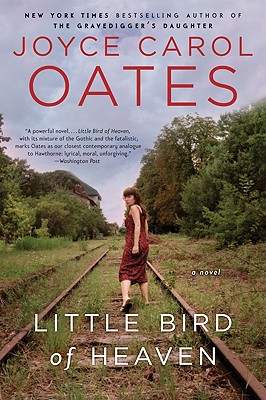 When young wife and mother Zoe Kruller is found brutally murdered, the police target two suspects: her estranged husband, Delray Kruller, and her longtime lover, Eddy Diehl. In turn, the Krullers' son, Aaron, and Diehl's daughter, Krista, become obsessed with each other, each believing the other's father guilty. By novel's end, the fated lovers are at last ready to exorcise the ghosts of the past and come to terms with their legacy of guilt, misplaced love, and redemptive yearning.

Told in halves in the very different voices of Krista and Aaron, Little Bird of Heaven is classic Oates—where the lyricism of intense sexual love is intertwined with the anguish of loss, and tenderness is barely distinguishable from cruelty.


Praise For Little Bird Of Heaven: A Novel…

“Neither crime, nor punishment, the ultimate coupling in the novel serves as a triumph and a release on a scale and with the intensity we’ve come to expect from one of our country’s premier writers.”
— NPR's All Things Considered

“Well-told and ultimately powerful.”
— The Onion

“Readers are breathlessly along for the ride, never sure if Oates will let [her characters] reach redemption or have them fall prey to the hands of their violent, unforgiving upbringings.”
— New York Post

“An absorbing study of lust, trust, and an unsolved murder, Oates’s gritty new mystery explores the attraction between the son of the victim and daughter of the accused.”
— Good Housekeeping

“In this narcotic, unnerving, brilliantly composed tale of the struggle for control over the body’s archaic urges, and the quest for morality in a catastrophically corrupted world, Oates creates magnetic characters of heightened awareness and staggering valor.”
— Booklist

“[This novel] is classic Oates. Its depiction of violence, families falling from grace and social class disparities, as well as its location, recall her 1996 bestseller, WE WERE THE MULVANEYS. Fans of Oates will delight in this offering and newcomers to her work will receive a first-class introduction.”
— BookPage

“Little Bird of Heaven starts with the urgency of thriller, then turns into something more existential as the years (and pages) go by...This is a tragedy on a classical scale...Oates has written a feminist novel with empathy for men, especially men without power, with no voice besides violence.”
— New York Times Book Review

“[This novel]...has an unnerving clarity about the power of sexual desire...it cleaves to the mind like a strong memory, and after you’ve read it, you may find yourself dreaming about the imaginary town of Sparta, and wondering what the people are doing now.”
— Chicago Sun-Times

“A powerful novel...In Sparta she has created a fictional universe to stand beside Faulkner’s Yoknapatawpha County or Cheever’s Shady Hill....Oates [is] our closest contemporary analogue to Hawthorne: lyrical, moral, unforgiving.”
— Washington Post

“[This is] the novelist at her brooding best . . . a seamless, satisfying tale of small-town life where...the long-smoldering relationships among the residents can often be like ‘tangled roots, beneath the surface of the earth.’”
— St. Louis Post-Dispatch
or support indie stores by buying on
Copyright © 2020 American Booksellers Association