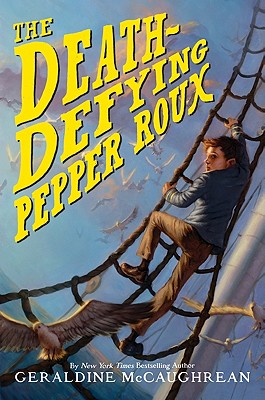 Pepper's fourteenth birthday is a momentous one.

It's the day he's supposed to die.

Everyone seems resigned to it—even Pepper, although he would much prefer to live. But can you sidestep Fate? Jump sideways into a different life? Naïve and trusting, Pepper sets a course through dangerous waters, inviting disaster and mayhem at every turn, one eye on the sky for fear of angels, one on the magnificent possibilities of being alive.

New York Times bestselling and Printz Award-winning author GeraldineMcCaughrean has created a gripping tale filled with dark humor and daringescapades, where the key to a boy's lifelies in facing his own death.

Join him on the run—if you can keep up.


Praise For The Death-Defying Pepper Roux…

“Creating vivid characters is just one of McCaughrean’s gifts. Readers will root for Pepper to get the ending he deserves—a happy one.”
— Publishers Weekly (starred review)

“A charming tale. Pepper will capture readers’ hearts, and Duchesse may be the most hilarious yet wise character in children’s literature this decade. This novel will be savored.”
— School Library Journal (starred review)

“[T]horoughly entertaining. It’s McCaughrean’s way with language that establish[es] this picaresque tale as the latest evidence that she is one of the more remarkable novelists writing for children today.”
— The Horn Book

“The Death-Defying Pepper Roux is a thoughtful novel and an entertaining adventure story. McCaughrean once again proves that she is a talented writer with the ability to weave truly enchanting metaphors.”
— Assembly on Literature for Adolescents

Geraldine McCaughrean is the Printz Award-winning author of The White Darkness. She has been honored with England's most prestigious children's book award, the Carnegie Medal, and is the only three-time winner ever of the Whitbread Children's Book Award. She also wrote Peter Pan in Scarlet, the first official sequel to the treasured masterpiece Peter Pan, and the critically acclaimed The Death-Defying Pepper Roux. Geraldine lives in Berkshire, England, with her husband and actress daughter.