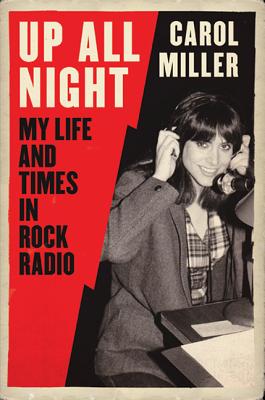 My Life and Times in Rock Radio

In her illuminating, fascinating, sometimes heartbreaking memoir, Up All Night, the legendary “Nightbird” tells the story of her colorful career—her rise to success in a male-dominated music industry; her close and personal dealings with rock royalty like Bruce Springsteen (whose music she first introduced to New York radio), Sir Paul McCartney, and Steven Tyler (whom she dated)—and details openly and honestly her battle against breast cancer for the very first time.


Praise For Up All Night: My Life and Times in Rock Radio…

Carol Miller is one of the longest-running New York radio personalities, currently heard on Clear Channel's Q104.3 in New York City, Sirius/XM satellite radio, and nationwide through United Stations. She's been on the air at WPLJ and WNEW, has been recognized by the Rock and Roll Hall of Fame, and has hosted dozens of national and international radio shows. She's appeared on VH-1, ET, and elsewhere. Originally from New York, she holds a B.A. from the University of Pennsylvania and a Juris Doctor from Hofstra University School of Law.