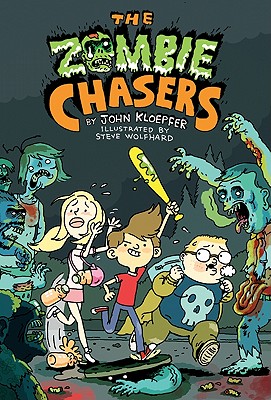 "An irreverent illustrated chapter book that features a ton of gore and zombie mayhem, but portrayed in such a cartoony, over-the-top style that it will make kids chuckle more than scream." (Brightly.com)

This is the first book in the heavily illustrated Zombie Chasers series by John Kloepfer. This fan-favorite is perfect for reluctant readers as well as fans of Diary of a Wimpy Kid and Dork Diaries.

A sudden zombie epidemic has turned a sleepover at Zack Clarke’s house into a level three creep-over! Zack’s sister is now a zombie; his living dead, flesh-eating neighbors have wrecked his house; and he’s been left to fend them off with his sister’s snotty BFF, Madison. Luckily Zack’s nerdy pal Rice has a plan to defeat the undead…if these three zombie chasers can make it out alive.


Praise For The Zombie Chasers…

“What makes this latest entry into the developing middle-grade zombie canon stand out is Kloepfer’s gleeful insistence on gore and Wolfhard’s squiggly drawings that really bring the laughs. Stick around for the next vomitous volume.”
— ALA Booklist