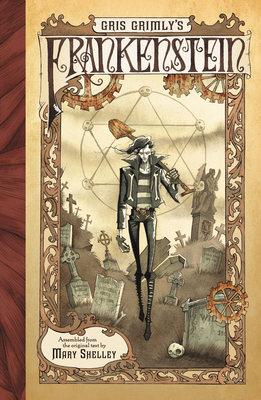 "Grimly enlivens the prose while retaining its power to both frighten and engage sympathy for the monster-creator Victor Frankenstein. This is a richly morose nightmare of a book, a primer for young readers on the pleasures and dangers of decadent languidness."—New York Times Book Review

Gris Grimly's Frankenstein is a twisted, fresh, and utterly original full-length, full-color graphic-novel adaptation of Mary Shelley's original text, brought to life by acclaimed illustrator Gris Grimly. The first fully illustrated version to use the original 1818 text, this handsome volume is destined to capture the imagination of those new to the story as well as those who know it well.

New York Times bestselling illustrator Gris Grimly has long considered Frankenstein to be one of his chief inspirations. From the bones and flesh of the original, he has cut and stitched Mary Shelley's text to his own artwork, creating something entirely new: a stunningly original remix, both classic and contemporary, sinister and seductive, heart-stopping and heartbreaking.

Mary Wollstonecraft Shelley was born on August 30, 1797, into a life of personal tragedy. In 1816, she married the poet Percy Bysshe Shelley, and that summer traveled with him and a host of other Romantic intellectuals to Geneva. Her greatest achievement was piecing together one of the most terrifying and renowned stories of all time: Frankenstein; or, The Modern Prometheus. Shelley conceived Frankenstein in, according to her, “a waking dream.” This vision was simply of a student kneeling before a corpse brought to life. Yet this tale of a mad creator and his abomination has inspired a multitude of storytellers and artists. She died on February 1, 1851.

“Grimly enlivens the prose while retaining its power to both frighten and engage sympathy for the monster-creator Victor Frankenstein. This is a richly morose nightmare of a book, a primer for young readers on the pleasures and dangers of decadent languidness.”
— New York Times Book Review

“Grimly’s fans have been awaiting this reworking of Shelley’s 1818 classic for four years, and they will rejoice in the end result. Readers encountering the story for the first time may find Grimly’s images rise to view whenever they think of it.”
— Publishers Weekly (starred review)

“Grimly proves himself a more adept assembler of parts than his subject proved to be; his product is no monster, but a pastiche of style and substance that will reanimate the original for yet another generation of readers.”
— Bulletin of the Center for Children’s Books (starred review)

“Grimly’s unique and twisted style blends perfectly with the material and breathes new life into these characters and situations. . . . Grimly’s beautiful and trim version is a great way to immerse a new audience in this important work.
— School Library Journal

“Grimly’s haunting illustrations dramatically show the range of human emotion connected with Frankenstein and his monster-rage, despair, hurt, lament, and even joy and excitement. Though often dark, Grimly’s version has a whimsical quality that will draw teens in and allow them to better access this classic novel.”
— Voice of Youth Advocates (VOYA)

“Gris has a natural empathy with the disfranchised, the lost. His line work becomes more elegant and precise with each book but it also becomes more and more emotional and expressive. Gris is a fabulist with the soul of a graveyard poet.”
— Guillermo del Toro, director of Hellboy and Pan's Labyrinth
or support indie stores by buying on
Copyright © 2020 American Booksellers Association