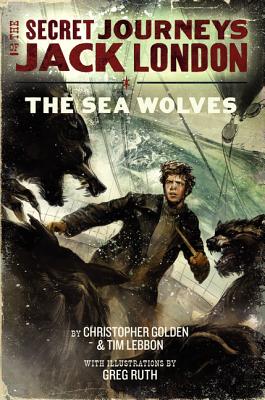 The world knows Jack London as a writer who lived his own real-life adventures. But there are some parts of his life that have remained hidden for many years, things even he couldn t set down in writing. Terrifying, mysterious, bizarre, and magical these are the Secret Journeys of Jack London.

Clinging to life after he is captured in an attack by savage pirates, Jack is unprepared for what he faces at the hands of the crew and their charismatic, murderous captain, Ghost. For these mariners are not mortal men but hungry beasts chasing gold and death across the North Pacific. Jack's only hope lies with Sabine a sad, sultry captive of Ghost's insatiable hunger. But on these waters, nothing is as it seems, and Sabine may be hiding dangerous secrets of her own.

The second installment in the adventures of the young Jack London is a masterpiece of tension and emotion. Christopher Golden and Tim Lebbon, along with illustrator Greg Ruth, have crafted a tale for readers of all ages, an action-packed, romantic, and suspenseful descent into the darkest desires of men and beasts and the hell that awaits them.


Praise For The Secret Journeys of Jack London, Book Two: The Sea Wolves…

A masterful mix of gold, cold, supernatural creatures, and dread magic makes this a great action adventure story.
-Garth Nix, author of the Abhorsen Trilogy, about The Secret Journeys Of Jack London, Book One

A great old-school adventure novel and the best use of the Wendigo legend I’ve ever read.
-Mike Mignola, creator of Hellboy, about The Secret Journeys Of Jack London, Book One

A rollicking adventure tale for modern-day readers, depicting with great awe the unforgiving, and yet beautiful, conditions Jack confronts. There is enough biographical reality to drive curious readers into sampling the works of the actual London while they eagerly await another chapter. That is a fire worth starting.
-Voice of Youth Advocates (VOYA) (Starred Review), about THE SECRET JOURNEYS OF JACK LONDON, BOOK ONE: THE WILD

Golden and Lebbon write with a gritty assurance that brings the fantasy elements-most notably, Jack’s multiple face-offs with the mythic Wendigo-down to earth. This first chapter kicks the door open for almost anything in book two.
-ALA Booklist, about THE SECRET JOURNEYS OF JACK LONDON, BOOK ONE: THE WILD