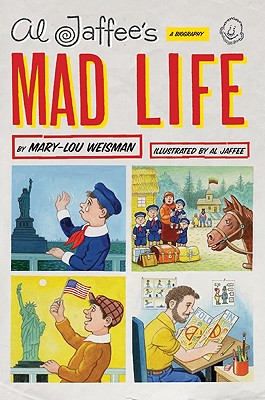 “One of the great cartoonists of our time.” –New Yorker cartoonist Arnold Roth

The remarkable story of one of America’s most prolific and beloved cartoonists, Al Jaffee, with dozens of original color illustrations. Jaffe’s career in cartooning stretches back to 1941—with early humor pieces for Timely Comics, a precursor to Marvel Comics—but the iconic artist remains best known for the brilliant Fold-In cartoons he invented at Bill Gaines’s Mad magazine in 1964. The cerebral and sardonic illustrations have inspired generations of Mad readers—including Stephen Colbert, R. Crumb, Gary Larson and Charles Shultz—to embrace a firm and healthy irreverence towards the status quo. New York Times columnist and bestselling author Mary-Lou Weisman (My Middle-Aged Baby Book) helps Jaffe tell his remarkable story.

“Al Jaffee’s Mad Life lays bare in harrowing yet often riotous detail how a Southern boy, twice uprooted by his mother to Lithuanian shtetls on the eve of World War II, grew up to become a tireless satirist for some of America’s cheekier magazines.”
— New York Times

“I’ve been privileged to know many brilliant cartoonists, but the incredibly creative, supremely talented Al Jaffee is right up there at the top of the list.”
— Stan Lee

“When I am among other cartoonists talking about the giants in our field, one of the first names that comes to the conversation is Al Jaffee and we all agree, He is a cartoonists cartoonist!”
— Sergio Aragones

Award-winning journalist and bestselling author Mary-Lou Weisman’s books include My Baby Boomer Baby Book, Traveling While Married, and Intensive Care: A Family Love Story. Her essays, feature articles, interviews, and film and book reviews have appeared in many publications, including the New Republic, Atlantic Monthly, and the New York Times, and she has contributed essays and commentary to Public Radio International. She lives in Westport, Connecticut, with her husband.

Al Jaffee is an award-winning cartoonist whose work has appeared in more 440 issues of MAD magazine—a total unmatched by any other writer or artist—including his trademark, the MAD fold-in, which has been featured in almost every issue since 1964.