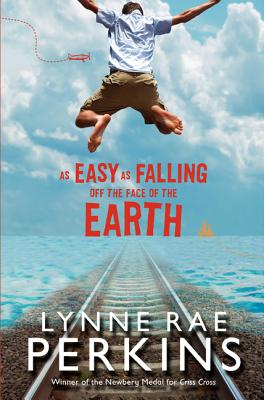 As Easy as Falling Off the Face of the Earth

The train was moving. Ry could hardly tell at first, but now he knew. It was gaining speed, and he wasn't fast enough to catch it. He had only gotten off for a minute, just to make a phone call—and now it was gone. He was in the middle of nowhere, alone.

Maybe it was the middle of nowhere, but to Ry, it felt like the beginning of something. Something that would take him in cars, planes, boats . . . over an ocean and back. Something like an adventure.

“Wherever Perkins’s warm, funny, wise narrative goes is where a reader wants to be.” — Horn Book (starred review)

“[Perkins’s] observations and turns of phrase are as unexpected and delightful as the travels she weaves together.” — Publishers Weekly (starred review)

Lynne Rae Perkins was awarded the Newbery Medal for Criss Cross. She is the author of four other novels—All Alone in the Universe, As Easy as Falling Off the Face of the Earth, Nuts to You, and Secret Sisters of the Salty Sea. Lynne Rae Perkins has also written and illustrated several acclaimed picture books, including Frank and Lucky Get Schooled; The Broken Cat; Snow Music: Pictures from Our Vacation; and The Cardboard Piano. The author lives with her family in northern Michigan. www.lynnerae.com