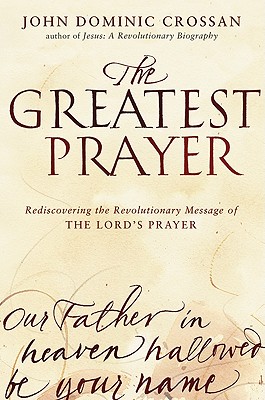 Rediscovering the Revolutionary Message of the Lord's Prayer


Praise For The Greatest Prayer: Rediscovering the Revolutionary Message of the Lord's Prayer…

“...A must-read, a guidebook for how and why the only prayer Jesus ever taught endures.”
— The Daily Beast

“Even if one disagrees with the author’s conclusions, it will be difficult to dislike his book, as one of Crossan’s gifts is his ability to challenge his readers in a gentle, respectful, and nonconfrontational manner.”
— Booklist

“John Dominic Crossan is arguably the world’s foremost scholar of the historical Jesus. In The Greatest Prayer, Crossan argues that Christianity’s best-known invocation is misunderstood and undervalued in today’s society.”
— Religion News Service

Crossan... shows how Jesus, couched in the words of this prayer, advises His followers to reject violent methods... and instead work for the coming of the Kingdom of God, the only way to achieve true freedom. . . . A fine effort by a fine scholar.”
— Publishers Weekly

“A full and loving exposition... of Christianity’s best-known and most-recited prayer. Crossan’s pastoral intent is more straightforward here than in some of his other works; scholars will appreciate the richness of his readings, while nonscholarly readers will be grateful for the directness and clarity of his approach.”
— Library Journal (starred review)

“Crossan’s reflections reveal something that may surprise his detractors: a man of profound and challenging faith, who in h is efforts to demystify Jesus has called us all back to the core of the gospel message.”
— U.S. Catholic

“[P]rovides a satisfying blend of history, scholarship and theology in researching the moral responsibilities that come with living a Godly life. The fundamental Lord’s Prayer here serves as a foundation for examining the principles of this life.”
— Midwest Book Review