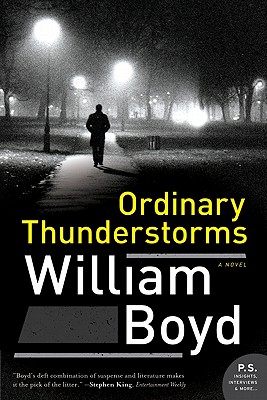 One May evening in London, Adam Kindred, a young climatologist in town for a job interview, is feeling good about the future as he sits down for a meal at a little Italian bistro. He strikes up a conversation with a solitary diner at the next table, who leaves soon afterward. With horrifying speed, this chance encounter leads to a series of malign accidents, through which Adam loses everything—home, family, friends, job, reputation, passport, credit cards, cell phone—never to get them back.

William Boyd's electrifying follow-up to the Costa Award-winning Restless, Ordinary Thunderstorms is a profound and gripping novel about the fragility of social identity, the corruption at the heart of big business, and the secrets that lie hidden in the seamy underbelly of every city.

William Boyd is also the author of A Good Man in Africa, winner of the Whitbread Award and the Somerset Maugham Award; An Ice-Cream War, winner of the John Llewellyn Rhys War Prize and short-listed for the Booker Prize; Brazzaville Beach, winner of the James Tait Black Memorial Prize; Restless, winner of the Costa Novel of the Year; Ordinary Thunderstorms; and Waiting for Sunrise, among other books. He lives in London.


Praise For Ordinary Thunderstorms: A Novel…

“Boyd has constructed a narrative machine of hilarious, near-impossible intricacy for the purpose of demonstrating that identity is fragile and that instinct, for better or worse, is not. . . . He is a debonair, versatile, casually philosophical literary entertainer—clever and thoughtful.”
— The New York Times Book Review

“Charles Dickens lurks in the shadows of William Boyd’s gripping new novel, Ordinary Thunderstorms, which . . . has a Dickensian cast of characters—predators and prey, tycoons and paupers, charlatans and stooges—orbiting one another in the mean streets of London.”
— The Wall Street Journal

“Boyd is highly adept at doing what novelists do best: exploring the multifarious possibilities implicit in human life.”
— The Los Angeles Times

“A thrilling story.”
— The Daily Beast

“Impressive. . . . Rich and engaging. . . . Boyd creates the rich spectrum of London with arresting cinematic detail. . . . Boyd gives a harrowing sense of how close and yet how distant the nether life of a large city is.”
— Ron Charles, The Washington Post
or support indie stores by buying on
Copyright © 2020 American Booksellers Association