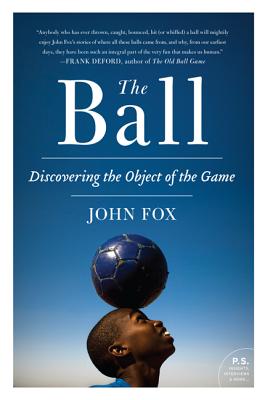 Discovering the Object of the Game

Anthropologist John Fox sets off on a worldwide adventure to thefarthest reaches of the globe and the deepest recesses of our ancientpast to answer a question inspired by his sports-loving son:

From Mexican jungles to the small-town gridirons of Ohio, frommedieval villages and royal courts to modern soccer pitches andbaseball parks, The Ball explores the little-known origins ofour favorite sports across the centuries, and traces how a simpleinvention like the ball has come to stake an unrivaled claim on ourpassions, our money, and our lives. Equal parts history and travelogue,The Ball removes us from the scandals and commercialism of today'ssports world to uncover the true reasons we play ball, helping us reclaimour universal connection to the games we love.


Praise For The Ball: Discovering the Object of the Game…

“Anybody who has ever thrown, caught, bounced, hit (or whiffed) a ball will mightily enjoy John Fox’s stories of where all these balls came from, and why, from our earliest days, they have been such an integral part of the very fun that makes us human.”
— Frank DeFord, author of The Old Ball Game

“[In THE BALL], a realm of behavior that we take for granted is seen anew in all of its original strangeness. The ball itself—whether made of grass and beeswax, opossum pelts, kangaroo scrotums or seal hides—is depicted freshly as an extraordinary invention of human happiness.”
— Will Blythe, The Wall Street Journal

“John Fox is dauntless…The Ball is a fascinating read that – like a good ball game – is both compelling and fun.”
— Wired

“John Fox is equal parts historian, anthropologist, world traveler, sports nut, and storyteller. The Ball is a fascinating exploration not just of the games we play but why we play them—of what our ballgames tell us about ourselves.”
— William Landay, New York Times bestselling author of Defending Jacob

“A fun and anecdotal new book…which uses the evolution of the ball itself to trace mankind’s progress from prehistory through ancient Egypt and gladiatorial Rome to the births of modern sports like tennis and “base-ball.”
— New York Post

“In tracing the fascinating history of ball games — from the primal contests between prehistoric tribes playing with stuffed balls of grass, to the hypercommercialized violence of twenty-first-century Super Bowls — readers witness the evolution of more than just sports…A book for fans and scholars alike!”
— Booklist

“An anthropologist and freelance journalist debuts with a peripatetic analysis of our ball games — where they came from, how they evolved and why we love them. Fox darts around the globe to show us the origins of our games…crackerjack reporting crackles throughout.”
— Kirkus Reviews

John Fox has excavated ancient ball courtsin Central America, traced Marco Polo's route acrossChina, and bicycled Africa's Rift Valley in search ofhuman origins. He has contributed commentary to VermontPublic Radio as well as Smithsonian, Outside, andSalon, among other publications. He lives in Boston.