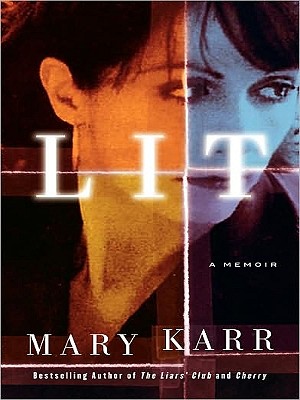 Mary Karr’s bestselling, unforgettable sequel to her beloved memoirs The Liars’ Club and Cherry—and one of the most critically acclaimed books of the year—Lit is about getting drunk and getting sober; becoming a mother by letting go of a mother; learning to write by learning to live.

The Boston Globe calls Lit a book that “reminds us not only how compelling personal stories can be, but how, in the hands of a master, they can transmute into the highest art." The New York Times Book Review calls it “a master class on the art of the memoir” in its Top 10 Books of 2009 Citation. Michiko Kakutani calls it “a book that lassos you, hogties your emotions and won’t let you go” in her New York Times review. And Susan Cheever states, simply, that Lit is “the best book about being a woman in America I have read in years."

In addition to the New York Times, Lit was named a Best Book of 2009 by the New Yorker (Reviewer Favorite), Entertainment Weekly (Top 10), Time (Top 10), the Washington Post, the San Francisco Chronicle, the Chicago Tribune, the Christian Science Monitor, Slate, the St. Louis Post Dispatch, the Cleveland Plain Dealer, and the Seattle Times.

“Searing. . . . A book that lassos you, hogties your emotions and won’t let you go. . . . Chronicles with searching intelligence, humor and grace the author’s slow, sometimes exhilarating, sometimes painful discovery of her vocation and her voice as a poet and writer.”
— Michiko Kakutani, New York Times

“Karr could tell you what’s on her grocery list, and its humor would make you bust a gut, its unexpected insights would make you think and her pitch-perfect command of our American vernacular might even take your breath away…. [Karr] holds the position of grande dame memoirista.”
— Samantha Dunn, Los Angeles Times

“In a gravelly, ground-glass-under-your-heel voice that can take you from laughter to awe in a few sentences, Karr has written the best book about being a woman in America I have read in years.”
— Susan Cheever, New York Times Book Review

“As irresistible as it is unflinchingly honest. . . . With grace, saltiness and profanity galore, Karr undeniably re-establishes herself as one of our finest memoirists and storytellers.”
— Melanie Gideon, San Francisco Chronicle

“Dazzling. . . . Lit reminds us not only how compelling personal stories can be, but how, in the hands of a master, they can transmute into the highest art.”
— Rebecca Steinitz, Boston Globe

“Karr movingly depicts her halting journey into AA, making it clear her grit and spirit remain intact.”
— Michelle Green, People, 3 ½ out of 4 stars

“Karr’s sharp and funny sensibility won me over to her previous two volumes, but what wins me over to Lit is the way her acute self-awareness conquers any hint that hers is the only version of this story…. Karr is as funny as ever.”
— Valery Sayers, Washington Post

“Mary Karr has never lacked for material. But she’s always delivered on the craft side, too, with her poet’s gift for show-and-tell.”
— Elizabeth Foy Larsen, Minneapolis Star Tribune

“With this third book Karr has managed to raise the bar higher still on the genre of memoir.”
— Steve Ross, Huffington Post

“Lit matches its predecessors in candor and outstrips them in insight.”
— Commonweal

“[Karr] continues to delight with her signature dark humor and pitch-perfect metaphors delivering large doses of wit and painful insights. . . . There are plenty of memoirs about being drunk, but this one has Karr’s voice-both sure-footed and breezy-behind it.”
— Beth Greenfield, Time Out New York