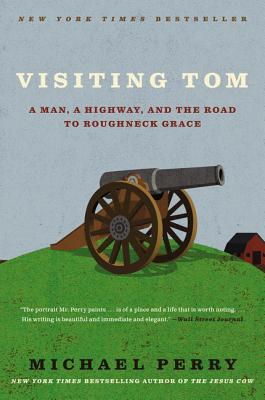 A Man, a Highway, and the Road to Roughneck Grace

“Perry can take comfort in the power of his writing, his ability to pull readers from all corners onto his Wisconsin spread, and make them feel right at home.”
—Seattle Times

Tuesdays with Morrie meets Bill Bryson in Visiting Tom, another witty, poignant, and stylish paean to living in New Auburn, Wisconsin, from Michael Perry. The author of Population: 485, Coop, and Truck: A Love Story, Perry takes us along on his uplifting visits with his octogenarian neighbor one valley over—and celebrates the wisdom, heart, and sass of a vanishing generation that embodies the indomitable spirit of small-town America.


Praise For Visiting Tom: A Man, a Highway, and the Road to Roughneck Grace…

“Drop whatever you are doing and sit down to read Michael Perry’s Visiting Tom….Perry is a craftsman of the highest order….When you go back to doing what you were doing when you picked up this book, you might just see your world with a broader, more humane perspective.”
— New York Journal of Books

“Visiting Tom is more than just a whimsical portrait of a unique character. It’s a meditation on modernity and self-reliance that sneaks up on you with its unexpected depth.”
— Capital Times

“Michael Perry writes the words that create the memoirs that make so many of us want to raise chickens and pigs, plant a few rows of corn or otherwise just make hay. Mostly, though, he makes us want to get to know our neighbors better - no matter where we live.”
— Experience Wisconsin Magazine

“The portrait Mr. Perry paints...is of a place and a life that is worth noting….His writing is beautiful and immediate and elegant.”
— Wall Street Journal

“[Perry] is a sharp and empathetic observer.”
— Journal Sentinel

“In Visiting Tom, a story that melds Perry’s unique humor with notes of Garrison Keillor and Billy Bryson, the elderly man’s tenderness and character jump off the page as he shares his thoughts on life and love.”
— Express Milwaukee

“It’s part memoir, part character piece. There’s a bit of the poetic to it. It’s about fighting bureaucracy, Foxfire-ish self-sustenance, life the ‘old timer’s’ way, and male-bonding foolishness. It’s about fatherhood, marriage and love. And it’s just about one of the sweetest books you’ll ever read.”
— Daily Sparks Tribune
or
Buy Here
Copyright © 2020 American Booksellers Association