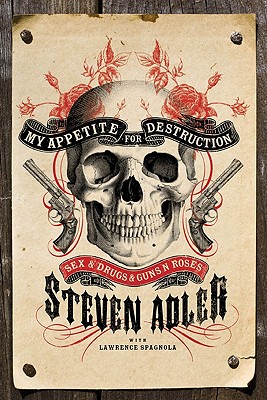 My Appetite for Destruction

From Steven Adler, the original drummer for Guns N’ Roses, comes My Appetite for Destruction, the inside story of GNR. Offering a different perspective from the bestselling Slash, Adler chronicles his life with the band, and own intense struggle with addiction, as seen on Dr. Drew’s Celebrity Rehab and Sober House.


Praise For My Appetite for Destruction: Sex, and Drugs, and Guns N' Roses…

“Great for the die-hard GNR fan…This is a cautionary tale, all the way.”
— Penthouse

Steven Adler was the drummer for Guns N' Roses from 1985 to 1990. In 2003, he formed Adler's Appetite and continues to perform with them live. He lives in Los Angeles with his wife, Carolina Adler.

Lawrence J. Spagnola is the coauthor of the New York Times bestselling My Appetite for Destruction by Steven Adler; and Christopher Award-winning writer of the Emmy-winning, Golden Globe-nominated television movie The Courageous Heart of Irena Sendler. He is a Harvard graduate and a Rockefeller Fellow.