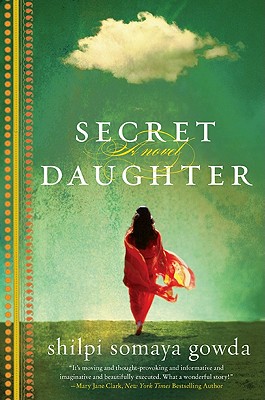 “Secret Daughter is the story of Asha, a daughter given up by her rural Indian mother in an attempt to give her a better life. Somer, Asha's adoptive mother in California, grapples with her daughter's return to her birth country as a young woman.The two families, intertwined by a twist of fate, will capture your heart.”
— Caitlin Doggart, Where the Sidewalk Ends, Chatham, MA
View the List

“Moving and thought-provoking and informative and imaginative and beautifully executed.  What a wonderful story!”
—Mary Jane Clark

“This book is a must for anyone touched by adoption, or India, or the delicate dynamic between adolescent girls and their mothers.”
—Sujata Massey, author of Shimura Trouble

Secret Daughter, a first novel by Shilpi Somaya Gowda, explores powerfully and poignantly the emotional terrain of motherhood, loss, identity, and love through the experiences of two families—one Indian, one American—and the child that binds them together. A masterful work set partially in the Mumbai slums so vividly portrayed in the hit film Slumdog Millionaire, Secret Daughter recalls the acclaimed novels of Kim Edwards and Thrity Umrigar, yet sparkles with the freshness of a truly exciting new literary voice.


Praise For Secret Daughter: A Novel…

“Gowda has masterfully portrayed two families... linked by a powerful, painful tie that complicates their lives... A thought-provoking examination of the challenges of being a woman in America and in India -- and in the psychological spaces in between.”
— Chitra Divakaruni, author of The Palace of Illusions

“Set in California and the teeming city of Mumbai, SECRET DAUGHTER is a beautifully composed compelling story of love, loss, discovery and the true meaning of family.”
— Anjali Banerjee, author of Imaginary Men

Fiction with a conscience, as two couples worlds apart are linked by an adopted child....A lightweight fable of family division and reconciliation, gaining intensity and depth from the author’s sharp social observations
— Kirkus Reviews

First novelist Gowda offers especially vivid descriptions of the contrasts and contradictions of modern India... Rife with themes that lend themselves to discussion, such as cultural identity, adoption, and women’s roles, this will appeal to the book club crowd.
— Library Journal

It’s moving and thought-provoking and informative and imaginative and beautifully executed. What a wonderful story!
— Mary Jane Clark, author of Dying for Mercy

The Secret Daughter is a deeply moving and timeless story of an adopted daughter’s long distance search for cultural identity and acceptance; first with the mother who raised her, and ultimately with the mother who gave her up.
— Kathleen Kent, author of The Heretic's Daughter

In her engaging debut, Gowda weaves together two compelling stories… Gowda writes with compassion and uncanny perception from the points of view of Kavita, Somer, and Asha, while portraying the vibrant traditions, sights, and sounds of modern India.
— Booklist

A No. 1 bestseller in Canada, “Secret Daughter” tells a nuanced coming-of-age story that is faithful to the economic and emotional realities of two very different cultures.
— Washington Post