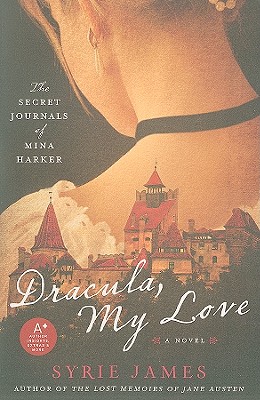 The Secret Journals of Mina Harker

Author Syrie James (The Lost Memoirs of Jane Austen) offers readers a breathtaking new perspective on Bram Stoker’s classic tale of the king of the vampires with Dracula, My Love. In these “Secret Journals of Mina Harker,” the object of Dracula’s desire relates for the very first time the shocking story of her scandalous seduction and sexual rebirth. This is not the chaste vampire romance of Twilight—Dracula, My Love celebrates a passionate obsession in all its hot and sensuous glory.


Praise For Dracula, My Love: The Secret Journals of Mina Harker…

“With its poetic, 19th-century prose style, this tale about a fierce, forbidden romance will appeal to even the most jaded romance fan.”
— Library Journal

“This very romantic side to Dracula is powerfully sensuous and masterfully told... Should sit side by side with Bram Stoker’s Dracula on your keeper shelf.”
— singletitles.com

“We enter Mina’s psyche...and likewise develop an understanding of Dracula’s motivations. This insight explains why a human woman and a ‘monster’ would literally ache to be with one another. I was exhilarated, enthralled, and completely mesmerized. Vampire book lovers will absolutely love this book.”
— Bestfantasystories.com

“Dracula, My Love had me hooked immediately. Filled with suspense and romance, it had me on the edge of my seat the entire time. It was incredibly well written and I couldn’t put it down. Syrie James paints an amazing picture of Dracula that left me both infatuated and appalled.”
— LitFest

“Only Mina Harker, who once fell under the seductive spell of literature’s most famous vampire, knows Dracula’s true story. James gives readers an intriguing alternate theory as to the events that occurred in Stoker’s classic horror tale while at the same time delivering a spooky yet thoroughly romantic love story.”
— Chicago Tribune

“This remarkable story twists and turns with every page ... The story unfolds with fast-paced action, well-written dialogue, and historical events mixed in with a truly remarkable love story that keeps the reader glued to every page. Another hit (for Syrie James)... right out of the park.”
— Feathered Quill

“Must read... I love the way this book was written... Both love stories (Mina and Jonathan/Mina and Dracula) have such depth... I became so caught up in the story that I wasn’t sure who I wanted Mina to end up with... A really emotional love story. Rating: 9 (Excellent)”
— The Season For Romance

“An excitingly dark tale with a romantic twist...a page turner from start to finish. The author has given Dracula something that is missing in earlier novels – a heart and soul...Like a vampire draining his latest victim, I sucked down every juicy detail of Dracula, My Love.”
— Stephanie's Written Word

“What really happened between Mina and Dracula? Syrie James provides her own provocative interpretation in the exciting Dracula, My Love... She keeps the suspense level high, so that even readers familiar with the original story will be furiously turning pages to see what happens next. Excellent novel.”
— Bitten By Books

“Syrie James paints a vivid picture of woman in the grip of dark passion. If you think you know the legend, her thoroughly modern Mina will surprise and delight you. It’s a dark and sizzling romance for hot summer days and nights.”
— Dolce Dolce

Syrie James is the USA Today bestselling author of the critically acclaimed Runaway Heiress; Nocturne; Dracula, My Love; The Secret Diaries of Charlotte Brontë; The Missing Manuscript of Jane Austen; Jane Austen's First Love; Forbidden; The Harrison Duet; and the international bestseller The Lost Memoirs of Jane Austen. An admitted Anglophile, Syrie loves all things British and 19th century. Her novels have hit many Best of the Year lists, won the Audie Romance Award, and been designated as Library Journal Editor’s Picks and the Women's National Book Association’s Great Group Read. Syrie lives in Los Angeles and is a member of RWA, JASNA, and the Writer's Guild of America. Visit Syrie at www.syriejames.com.