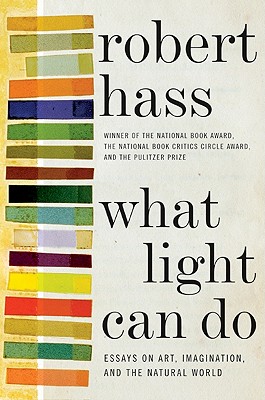 What Light Can Do (Hardcover)

Essays on Art, Imagination, and the Natural World

What Light Can Do is a magnificent companion piece to the former U.S. Poet Laureate’s Pulitzer Prize and National Book Award-winning poetry collection, Time and Materials, as well as his earlier book of essays, the NBCC Award-winner Twentieth Century Pleasures. Haas brilliantly discourses on many of his favorite topics—on writers ranging from Jack London to Wallace Stevens to Allen Ginsberg to Cormac McCarthy; on California; and on the art of photography in several memorable pieces—in What Light Can Do, a remarkable literary treasure that might best be described as “luminous.”


Praise For What Light Can Do: Essays on Art, Imagination, and the Natural World…

“Drawn to compelling subjects that he makes his own, Hass writes prose every bit as zestful, penetrating, and sure-footed as his poetry. . . This powerful collection affirms Hass’ stature as a philosophically attentive observer, deep thinker, and writer who dazzles and rousts.”
— Booklist
or
Not Currently Available for Direct Purchase
Copyright © 2020 American Booksellers Association