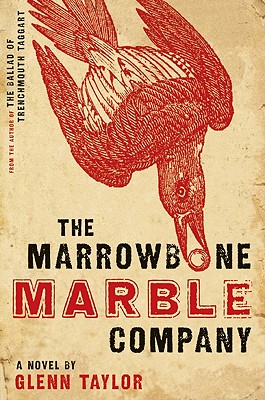 “Gripping and raw, set between the moral compass of the '40s and the social revolution of the '60s, this novel follows a West Virginia family though their turbulent relationships with war, poverty, social injustice and racial segregation. I It would be hard not to call this a piece of fine art, with its classic storytelling and brilliant writing.”
— Scott Fultz, Next Chapter Bookshop, Mequon, WI
View the List

Author M. Glenn Taylor was nominated for the National Book Critic’s Circle Award for his novel The Ballad of Trenchmouth Taggart. Taylor returns spectacularly with The Marrowbone Marble Company, a sweeping story set against the changing landscape of post-World War II America that recalls The Story of Edgar Sawtelle and the early lyrical work of Cormac McCarthy. A masterwork of Southern fiction that the National Book Award-winning author of Spartina, John Casey, calls, “a terrific rough-and-tumble novel,” The Marrowbone Marble Company is a gift from a truly exhilarating American voice.


Praise For The Marrowbone Marble Company: A Novel…

“THE MARROWBONE MARBLE COMPANY is a novel about one man’s mountaintop idealism, but written in so earthy and sweat-streaked a way that it never runs out of oxygen.”
— Christian Science Monitor

“Taylor fluidly composes a portrait of a man whose sheer fortitude makes molehills out of mountains...powerful prose...a big, ambitious book that falls somewhere between the sweeping epics of Richard Russo and the masculine bravado of Ken Kesey’s best work.”
— Kirkus Reviews

“Taylor has created a remarkably complex, soulful, and provocative historical novel righteous in its perspective on America’s struggle to live up to its core beliefs.”
— Booklist (starred review)

“A beautifully realized novel...Central among [the characters] is Loyal Ledford himself. A renegade who rejects the precast American Dream for something more elusive, perhaps even unattainable, this scarred, flawed man embodies a familiar component of our national character: hope.”
— Bookpage

“A novel of stirring clarity and power [that] speaks unforgettably from a half century ago to issues still unresolved in American life. Taylor has composed a hymn to the human heart.”
— Jayne Anne Phillips, author of LARK AND TERMITE

“A terrific rough-and-tumble novel. It’s set in West Virginia, which may be the last state in the US where whole-hearted goodness, violence, hard work and hard ways are all just a breath apart. Glenn Taylor gets it all in—both in sharp detail and in bold broad strokes.”
— John Casey, National Book Award-winning author of SPARTINA

Glenn Taylor was born and raised in Huntington, West Virginia. His first novel, The Ballad of Trenchmouth Taggart, was a finalist for the 2009 National Book Critics Circle Award. Taylor lives in Chicago with his wife and three sons.