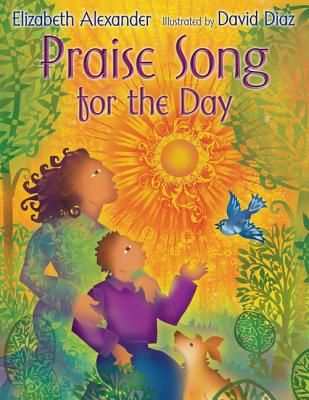 Praise Song for the Day was commissioned for the inauguration of President Barack Obama. These inspiring words by award-winning poet Elizabeth Alexander celebrate all that has made America what it is today and challenge us—as individuals, as communities, as a nation—to continue working toward the dream of a better world for all.

Together with spectacular illustrations by Caldecott Award–winning illustrator David Diaz, Praise Song for the Day reminds us that we are an ever-evolving nation fueled by hope, freedom, perseverance, and love.


Praise For Praise Song for the Day…

“With the 2012 presidential election coming up, it is good to look back and recall the historical significance of the 2008 vote that resulted in the election of our first African American president. This is a book that can and should make that happen.” — School Library Journal

Elizabeth Alexander is a poet, essayist, playwright, and teacher born in New York City and raised in Washington, DC. She has published numerous books of poems, including American Sublime (2005), which was one of three finalists for the Pulitzer Prize; a young adult collection (coauthored with Marilyn Nelson), Miss Crandall's School for Young Ladies & Little Misses of Color, which won a 2008 Connecticut Book Award; and, most recently, Crave Radiance: New and Selected Poems 1990-2010. She teaches at Yale University, and this is her first picture book.