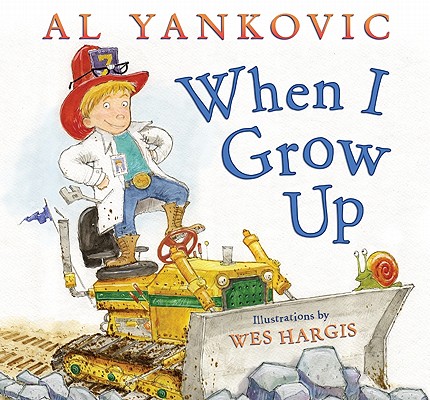 When I Grow Up

Grammy Award winner and pop culture icon “Weird Al” Yankovic delivers his first picture book, bringing his trademark wit, wordplay, and silliness to a story that explores the timeless question “What do you want to be when you grow up?” Funny and charming, this is a celebration of creativity and possibility.

An Amazon Best Book of the Month! "The farce and parody make this a rare book with appeal to both kids and adults" (Booklist).

It’s Show-and-Tell time in Mrs. Krupp’s class, and Billy just can’t wait for his turn! Today the class is discussing what they want to be when they grow up, and our exuberant eight-year-old hero is bursting to tell everyone about his future career plans.

In dazzling wordplay and delicious rhymes, Billy regales his patient teacher and amazed classmates with tales of the variety of careers he wants to pursue—each more outlandish and wildly imaginative than the last!


Praise For When I Grow Up…

“A rare book with appeal to both kids and adults.” — Booklist

Known for more than thirty years as America's premier satirist of popular music and culture, "Weird Al" Yankovic has had almost as many careers as Billy can dream of. Advised by his father to do whatever made him happy, he has accordingly been a comedian, singer/songwriter, music producer, actor, director, and writer—often all at the same time. Mr. Yankovic has won three Grammy Awards and has sold more comedy recordings than anyone else in history. He lives with his family in Southern California.