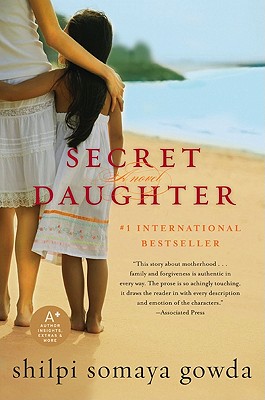 “Secret Daughter is the story of Asha, a daughter given up by her rural Indian mother in an attempt to give her a better life. Somer, Asha's adoptive mother in California, grapples with her daughter's return to her birth country as a young woman.The two families, intertwined by a twist of fate, will capture your heart.”
— Caitlin Doggart, Where the Sidewalk Ends, Chatham, MA
View the List

“Moving and thought-provoking and informative and imaginative and beautifully executed.  What a wonderful story!”
—Mary Jane Clark

“This book is a must for anyone touched by adoption, or India, or the delicate dynamic between adolescent girls and their mothers.”
—Sujata Massey, author of Shimura Trouble

Secret Daughter, a first novel by Shilpi Somaya Gowda, explores powerfully and poignantly the emotional terrain of motherhood, loss, identity, and love through the experiences of two families—one Indian, one American—and the child that binds them together. A masterful work set partially in the Mumbai slums so vividly portrayed in the hit film Slumdog Millionaire, Secret Daughter recalls the acclaimed novels of Kim Edwards and Thrity Umrigar, yet sparkles with the freshness of a truly exciting new literary voice.


Praise For Secret Daughter: A Novel…

“Gowda has masterfully portrayed two families... linked by a powerful, painful tie that complicates their lives... A thought-provoking examination of the challenges of being a woman in America and in India -- and in the psychological spaces in between.”
— Chitra Divakaruni, author of The Palace of Illusions

“Set in California and the teeming city of Mumbai, SECRET DAUGHTER is a beautifully composed compelling story of love, loss, discovery and the true meaning of family.”
— Anjali Banerjee, author of Imaginary Men

Fiction with a conscience, as two couples worlds apart are linked by an adopted child....A lightweight fable of family division and reconciliation, gaining intensity and depth from the author’s sharp social observations
— Kirkus Reviews

First novelist Gowda offers especially vivid descriptions of the contrasts and contradictions of modern India... Rife with themes that lend themselves to discussion, such as cultural identity, adoption, and women’s roles, this will appeal to the book club crowd.
— Library Journal

It’s moving and thought-provoking and informative and imaginative and beautifully executed. What a wonderful story!
— Mary Jane Clark, author of Dying for Mercy

The Secret Daughter is a deeply moving and timeless story of an adopted daughter’s long distance search for cultural identity and acceptance; first with the mother who raised her, and ultimately with the mother who gave her up.
— Kathleen Kent, author of The Heretic's Daughter

In her engaging debut, Gowda weaves together two compelling stories… Gowda writes with compassion and uncanny perception from the points of view of Kavita, Somer, and Asha, while portraying the vibrant traditions, sights, and sounds of modern India.
— Booklist

A No. 1 bestseller in Canada, “Secret Daughter” tells a nuanced coming-of-age story that is faithful to the economic and emotional realities of two very different cultures.
— Washington Post

On the way to the orphanage in Bombay, Kavita reflects on “what power there is in naming another living being.” She gives her daughter the name Usha at birth, but she is later raised by her adoptive parents as Asha. Kavita’s name changed when she was married, and her given name reappears again later in the story. Even Krishnan becomes known as “Kris” in America. What is the significance of these changing names throughout the story? How are names intertwined with your own sense of identity and belonging?

Kavita faces a difficult choice at the beginning of the novel. Did she make the right decision? What would you have done if you were in Kavita’s place? What would the repercussions be of making a different choice?

Why do you think Somer made the decision to adopt a child from India, and do you believe her reasons were sound? Are there any parallels between how she made this decision, and her previous decision to marry Krishnan?

Both families in the novel leave their home in search of better life—the Merchants leave their village for Bombay, and Krishnan leaves India for America—and this act of migration creates longing for home and feelings of displacement. Do you think their migrations were driven more by wanting to leave home or being attracted to a new place? Would the characters have made different choices if they knew what the consequences would be?

The novel explores the issue of how gender affects one’s role in society, both in India and the United States. Despite much of the obvious discrimination women face in India, Sarla Thakkar believes, “you can’t always see the power women hold, but it is there . . . ” In what ways is this true? What are the benefits and drawbacks of being a woman in each of these countries? Are there any similarities in the female experience across the two cultures?

An overarching theme of the novel is motherhood, and how that experience can change a woman. Both Somer and Kavita have powerful experiences and emotions around pregnancy, childbirth and mothering. What are the differences in how they experience motherhood, and are there any similarities? Are there universal aspects to motherhood or is it an individual experience?

Both marriages portrayed in the novel, despite different circumstances and origins, face significant challenges. How did Kavita and Jasu’s marriage recover from the dramatic conflict they faced at the beginning? What caused the estrangement between Krishnan and Somer, and how did each spouse contribute to it? Do you believe one marriage is fundamentally stronger than the other? What do you believe the future holds for each couple?

Asha grows up with a deep curiosity about her biological family in India. Could her parents have done anything to lessen the sense of feeling incomplete Asha had as an adolescent? Can her conflict with Somer be chalked up to that experienced in all mother-teenage daughter relationships, or was it more complicated? What does Asha learn about the true meaning of family, and could she have learned it without going to India?

This story turns on a twist of fate that changes the life path of Asha, and follows the parallel lives of Asha and her brother in India. Do you believe Asha was better off being taken to the orphanage as a baby than she would have been with her birth parents? Could Vijay have had a different life? How much of our lives are destined for us, and how much is within our power to change? Reflecting on your own life, what have been the turning points that have been made for you, and those made by you?

The importance of relationships across generations echoes through the novel, particularly at the end, with the deaths of Krishnan’s father and Kavita’s mother. What role do elder relatives play in the story? What hopes and expectations are passed down? What did you think of the relationship that develops between Sarla (Dadima) and Asha? How are these ideas complicated or resolved in the rituals of the cremation ceremonies at the end?

What do you believe Kavita and Jasu are feeling and thinking at the end of the novel? Were you surprised at the ending? Did you find it satisfying? How did your view of Jasu’s character change from the beginning, and why? What do you imagine happens to these families next?