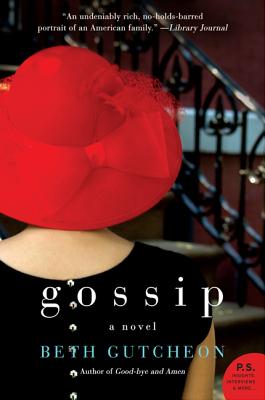 The critically acclaimed author of Good-bye and Amen, Leeway Cottage, and More Than You Know, Beth Gutcheon returns with Gossip, a sharply perceptive and emotionally resonant novel about the power of knowing things about others, the consequences of rumor, and the unexpected price of friendship. A story set among the rich, famous, and well-dressed of Manhattan’s Upper East Side, Gossip is a bravura display of this exceptional author’s breathtaking talents, addressing important themes of motherhood, friendship, and fidelity. Every reader who admires the strong, character-driven women’s fiction of Sue Miller, Alice Hoffman, Elizabeth Berg, and Kaye Gibbons should lend an ear to Beth Gutcheon’s Gossip.


Praise For Gossip: A Novel…

“[C]ompelling…Beautifully written and told from varying points of view, this sweeping saga will strike a chord with anyone who loves to read about family. Four stars.” — Romantic Times on GOOD-BYE AND AMEN

“Good-Bye and Amen is a tour de force of structure and voice. Gutcheon had me at the first sentence and I didn’t put the book down until I had finished it. Marvelous and memorable.” — Karen Joy Fowler, author of Wit’s End and The Jane Austen Book Club

“The book reads seamlessly…Gutcheon is a novelist with a poetic grasp of the language and a keen eye for the quirks and foibles that make us human. ” — San Antonio Express-News on GOOD-BYE AND AMEN

“Beth Gutcheon has something real to say . . . There is a world of entertainment in Domestic Pleasures.” — —The New York Times Book Review

“The charms of Domestic Pleasures--its wit, its sharp dialogue, its perfectly tuned characters--tackle you early on and keep you pinned, turning pages, through the last, wonderfully satisfying scene.” — Michael Dorris

“She has absolutely perfect pitch when it comes to capturing the lives of these remarkable women. This seems to be the quintessential American woman’s tale. I loved it.” — Anne Rivers Siddons

“The importance of connections between women is highlighted in this story of friendship and support among a group of five women.” — Booklist

“An unpretentious tale of freindship among the well-heeled that is both a page-turner and day-brightener.” — Kirkus Reviews

“The dialogue is convincing and well-paced. The suspense is strung out for maximum effect. The images are vivid and uncluttered This [is] a book that is tough to put down.” — USA Today

“The taut facility with which Gutcheon twines the two stories creates real suspense While Gutcheon cannily evokes the ephemerality of passion, she also evinces, with stark and elemental resonance, the way love and hatred shape lives.” — The New York Times Book Review

“A graceful and elegant novel that explores the unintended damage simmering hostility and sharing confidences can bring, Gossip builds to a stunning and devastating finish.” — Booklist on GOSSIP

“This compelling story is full of emotions—heartache, love, frustrations, and even a generous dose of humor. But it is the compelling sense of friendship and loyatly between the characters that is the star attraction of this book, and Gutcheon proves her mastery as a consummate storyteller with the spellbinding novel.” — Ventura County Star on GOSSIP

“GOSSIP is compelling story full of many emotions, heartache, love, frustrations, and even a generous dose of humor.…Gutcheon proves her mastery as a consummate storyteller with this spellbinding novel.” — Fresh Fiction on GOSSIP

“[Gutcheon] writes poignantly, but with a sharp comic edge, about female friendship, the bleakness of fate and the disappointments fo lvoe; and her grasp of the profound connection between clothes and emotion--a theme inexplicably neglected in the moderl novel--recalls Nancy Mitford at her more seriously frivolous.” — The Sunday Telegraph